5 Towns to Consider if You’re Considering Moving to Austin 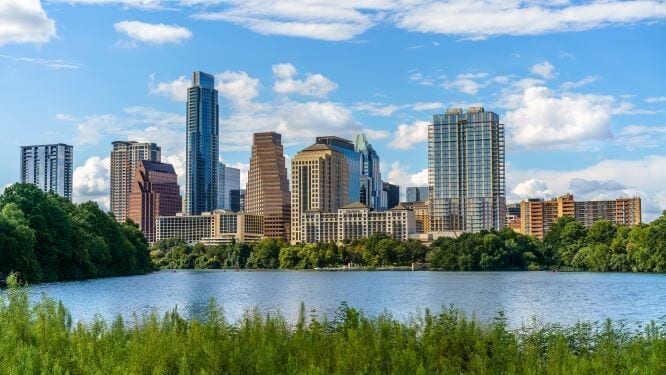 These communities are hot — and they keep getting hotter!

Austin is one of the fastest-growing areas in the U.S. — and it’s showing no signs of slowing down. With more and more people heading to Austin from all over the country, this market is booming, influenced by not just its trendsetting beats-and-eats heritage but, also, by the fast-growing tech scene and the people relocating from coast to coast.

“Austin is such a unique place to live,” says Katie Cranis, Suburban Jungle’s Austin Strategist. “And whether you’re moving from the city to the suburbs or from another city to the Austin area, you’re not alone. We’re seeing so many people from New York, San Francisco, Chicago, everywhere come to Austin. So no matter where you’re coming from you’re not alone — and you’ll no doubt find the perfect place to call ‘home.’”

If you’re considering a move to Austin — whether it’s work-inspired or lifestyle-driven — it’s important to explore the lay of the land, remotely and, ideally, in person, she says. To jumpstart your search and get you thinking of what matters most, check out these must-see communities. They’re hot, Katie reports, and keep getting hotter.

“Dripping Springs is very big among my clients — and I think it’s only going to be on more and more people’s radar in 2021,” Katie says. “People just love it — it’s in Hill Country, 30 minutes to downtown and, for that 30 minutes, you’re getting so much more land. There are also lots of new communities and homes being built in in Dripping Springs, which I know appeals to many families.”

Dripping Springs, Katie adds, has been particularly popular among her Northern California clients looking for opportunities to hike, bike, jog, swim and spend time outside.

Home to some of the beautiful parks, lakes and other natural settings in Hill Country, there’s always something to do, no matter the time of year — Pedernales Falls State Park, Hamilton Pool Preserve, Reimers Ranch Park and Westcave Outdoor Discovery Center are among the most popular go-tos. The foodie scene is also alive and well in Dripping Springs.

Expect tons of breweries, distilleries and wineries all in and around town.

Like Dripping Springs, Lake Travis is located in Travis County, right in the heart of Hill Country — and known for its natural beauty, including a massive lake and tons of places to hike and explore (we love nearby Krause Springs which offers hiking trails, swimming, tons of nature and more).

For golfers, there are plenty of options, too — Lake Travis is home to four courses, including Willie Nelson’s Pedernales Golf Club.

That, though, is just the beginning. Lake Travis Independent School District is a 5A school noted for its academics, arts and sports. Lake Travis High School is frequently named among the best in the country.

“West Lake Hills is one of the towns I almost always chat with clients about, especially for out-of-towners,” Katie says. “It’s especially popular among the San Francisco crowd — families relocating from Silicon Valley for work or because they’re looking for something new…and now is a perfect time.”

Students in West Lake Hills are zoned for the highly-ranked Eanes Independent School District. In 2020, the district ranked among the top 10 in the U.S. With its heavy college-prep focus (85% of students take at least one AP course) Westlake High School also consistently ranks among the best in the nation. Schools, though, are just a piece of West Lake Hills’ appeal.

Within its prime West Austin location, families have access to countless activities and amenities including nearby Boulder Trail Park, Lost Creek Park and Rollingwood Municipal Park, all minutes away. What’s more, given its proximity to downtown Austin — about 10-20 minutes by car — residents have access to everything, including a distinctively urban vibe in suburbia.

The community is also home to the popular Austin Country Club, a family-oriented private club.

“So many young families are heading to East Austin,” Katie says. “There are tons of condos coming up in the more urban areas, but you can still find quieter, more traditionally suburban neighborhoods in East Austin.” She recently worked with a long-time Brooklynite looking for a lifestyle change, but who still wanted to be in an exciting urban-meets-suburban spot.

East Austin, Katie says, fit the bill. The center of the “Keep Austin Weird” movement, this dynamic area is packed with artists and creative types, deeply connected to the community and to sustainable living. Expect trendy wine and cocktail bars, pop up galleries, street art and a food scene that could give epicurean epicenters a run for their money.

Same goes for live music — East Austin is home to venues like Hotel Vegas, The White Horse and Sahara Lounge, among others.

While not a specific community, The Domain is a popular shopping spot in Austin — and, now, home to luxury condos, global restaurants, concert venues and more. “People will say they live near The Domain — it’s definitely a distinct area in Austin,” Katie says.

Let’s talk! Get in touch to learn more about these and other Austin neighborhoods and suburbs.