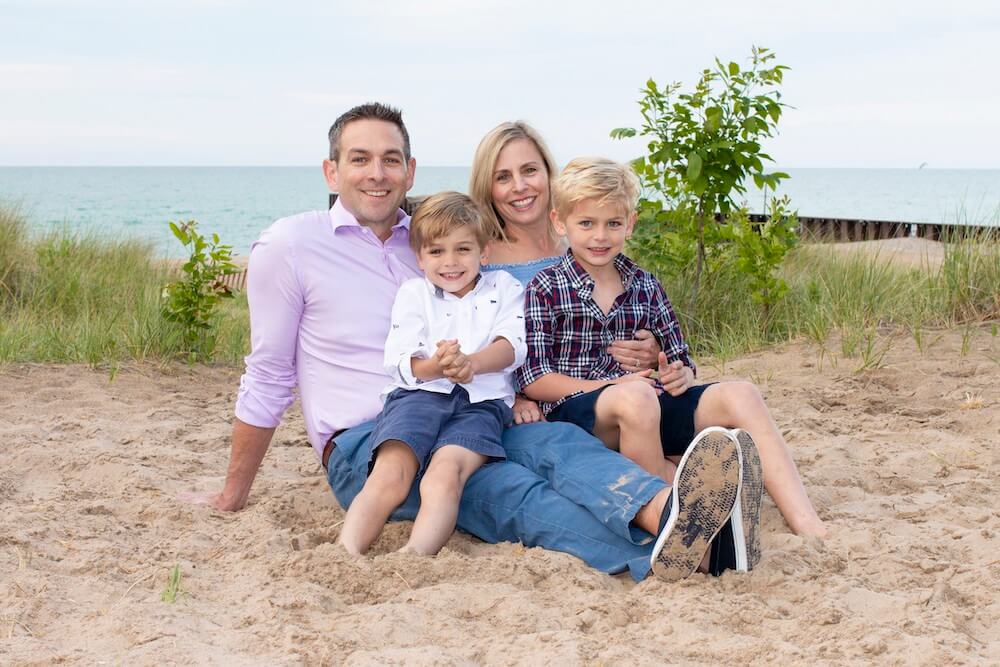 Before she even considered the Chicago suburbs, Strategist Caroline Hays decided to spend some time soaking up the warm weather. “After college, I spent 12 years in Atlanta,” she says. “I’m from the midwest and I knew I’d go back, but I wanted to take a little time to be in a warm climate — it was great.” Craving another big city, Caroline packed up and headed to Chicago where she met her husband and welcomed their first child. Even then, though, the family hunkered down, buying a condo and planning for urban life. But when their second child came along, Caroline and her husband felt the squeeze. “We realized we needed more space pretty quickly,” she says. “And for our oldest, school was on the horizon, so timing-wise looking in the suburbs made sense. But I admit, I was reluctant. I was nervous about our commutes and nervous about leaving the city. Would the suburbs be right for us? Would we be bored? We didn’t know!”

With a newborn and toddler in tow, the Hays moved to Evanston. A bustling college town, Evanston struck the right urban-meets-suburban vibe for Caroline and her husband — and their home was just 30 minutes to downtown Chicago. “I also loved that Evanston is on the lake,” she adds. “I grew up going to the ocean, so being near this beautiful lake and having a neighborhood beach really sealed the deal for us. And even now it’s a huge perk — we love being at the lake and the beach. We spend a lot of time there during the summer.” Eight years later, Caroline and her family of four are loving life in Evanston. Her kids walk to school and to friends’ houses. “Because of the setup of Evanston, it’s close to everyone, so people don’t have to drive and you’re always within a few blocks of friends’ houses,” she says. “No one is more than about six blocks from us.” This proximity, Caroline adds, creates a strong sense of community residents feel from day one. “It’s a huge bonus. It’s easy to make friends and meet new people — it’s a very welcoming community.”

Since joining Suburban Jungle in 2020, Caroline has been focused on helping other Chicago families find the right suburb for their families. That, she says, starts by listening and zeroing in on key preferences and priorities — even if clients don’t recognize them yet. “I know a lot of people are apprehensive about leaving the city, and I can easily empathize with that,” she says. “I felt the same way. But now I look back and I have no regrets. We’ve been so happy in Evanston and the more I’ve gotten to know other suburbs, the more incredible towns I’ve seen — there’s really something for everyone here, whether they want to maintain that urban experience or want to feel far from it all.” From there, Caroline says, her focus is on helping families understand their options and the unique communities in the Chicago suburbs. “With people working from home more, families are less focused on commute times and more focused on finding a town that checks all of their boxes,” Caroline says. “That’s a big change from when we moved eight years ago — then being close to the city was number one for so many families, including mine. Now, though, it’s exciting to have so many options and such a broad area to explore — there’s so much here and it’s such an exciting time to be searching the Chicago suburbs.” Find the right suburb for your family! Schedule a free Suburbs Strategy session now.