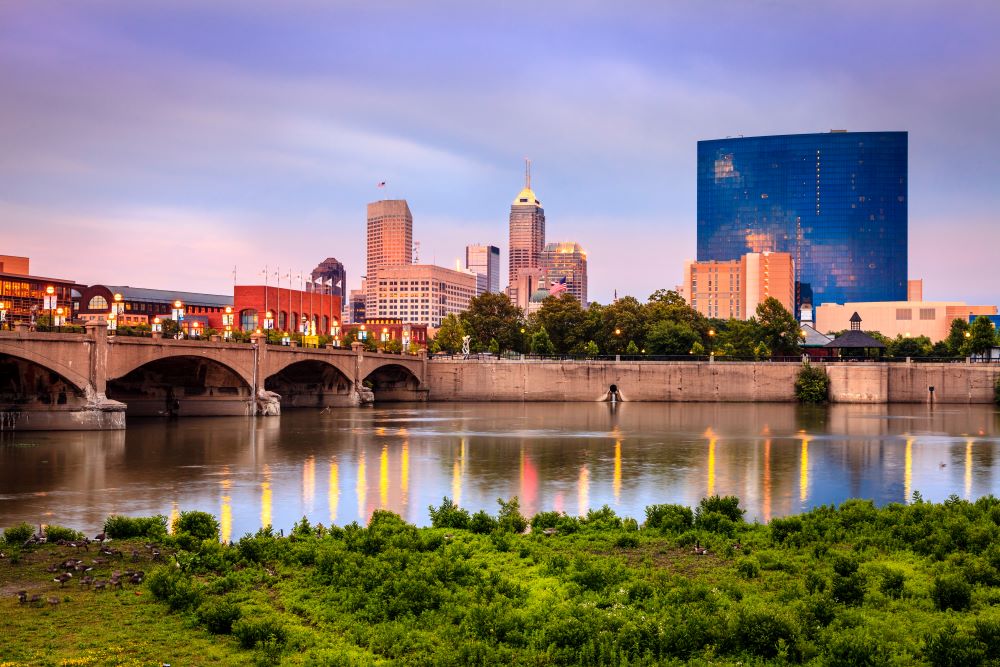 Arts, culture, sports, and more — Indy really has something for everyone.

Indianapolis has it all — and more and more people are quickly discovering the unparalleled benefits of calling this area “home.” Not only does Indy host the biggest single-day sporting event in the world but, as the “Crossroads of America,” this capital city is packed with everything from world-class restaurants to entertainment to, as locals know, miles and miles of bike lanes that keep residents active and on the move.

But that’s just the beginning. Here’s why we’re loving life in the Indianapolis suburbs.

If you’re looking for a big city experience without the stress (and price tag) that comes with New York or LA, Indy is the place to be. It’s a major metro area that ranks in the top 20 most populated US cities. It’s home to multiple professional sports teams including the Colts, Pacers, and Fever. Downtown Indy is incredibly walkable and there’s always something going on from 5K races to film festivals and more. And whether you’re in the mood for a handcrafted latte or a craft cocktail, Indy has you covered.

But what locals tell us they love most about the Indianapolis area is just how welcoming it is. The Midwest is known for its friendly residents who enjoy living at a more relaxed pace than those on the coasts. And with tons of community groups in the suburbs — Carmel’s cycling club and newcomers associations, for starters – there are plenty of opportunities for you to plug in right away.

The greater Indianapolis area is more affordable than much of the country — about 2% below the national average. That low cost of living means you can enjoy a higher quality of life without breaking the bank.

On top of the low cost of living, Indianapolis has a thriving job market with just 3.3% unemployment. While healthcare, insurance, and education dominate, you’ll find jobs in virtually every industry and niche, helping power their growing economy.

Tech is also a major player in the job market. This area is quickly earning the reputation as the Midwest’s Silicon Valley and Indy ranks high on lists of the best cities for women in tech.

Known as both the “Amateur Sports Capital of the World” and “Racing Capital of the World” it’s no surprise sports are huge in Indy. This city is home to the iconic Indy 500 which attracts hundreds of thousands of spectators each May to the Indianapolis Motor Speedway. Football fans can cheer on the Super Bowl-winning Colts at Lucas Oil Stadium while basketball fans head to the Gainbridge Fieldhouse for Pacers and Fever games.

College athletics are also a big part of Indy’s identity. The NCAA is based in Indianapolis and locals can visit the Hall of Champions in town. And when the NCAA tournament rolls around, residents cheer on the famed Indiana Hoosiers (who have five tournament titles to their name).

The greater Indianapolis area is also known for its incredible arts and culture scene. Hop on the 8-mile Cultural Trail for a taste of the town’s creative vibe. You’ll pass colorful murals and statues created by local artists along the way. Downtown, locals can also visit the Eiteljorg Museum of American Indians and Western Art or Indiana State Museum and in the Woodstock neighborhood, there’s the impressive Newfields art museum.

If live music is your thing, check out the lineup at Noblesville’s Ruoff Music Center for big-name acts or the Greenwood Amphitheater for summer concerts by up-and-coming artists.

Indianapolis and its surrounding suburbs are cycling hubs. The Major Taylor Velodrome hosts BMX and collegiate cycling events throughout the year. Each fall, the city hosts several elite races as part of the two-day Momentum Indy event.

But you don’t have to be a professional to take advantage of Indy’s cycling culture. Biking enthusiasts enjoy miles of scenic trails in town (check out the Cultural Trail and Monon Rail Trail) plus there are tons of paths in the suburbs, too. Mountain biking is also huge and one of the best courses is found in Fishers’ Flat Fork Creek Park. And when you’re in the market for gear or a bike repair, you’ll find shops all across the area like Westfield Cyclesports and Gear Up Cyclery.

More and more, young professionals and families are heading to Indy. While the lower cost of living is no doubt a draw, this is an incredible area for millennials — there’s no shortage of nightlife options, plus areas like Broad Ripple offer adult rec leagues for active residents who want to connect with other kickball or softball enthusiasts.

Ready to start exploring the Indianapolis suburbs? Reach out today to get started! We’re here to help you find the perfect town for you. All of our services are FREE.