An Amazingly Easy Move to Natick 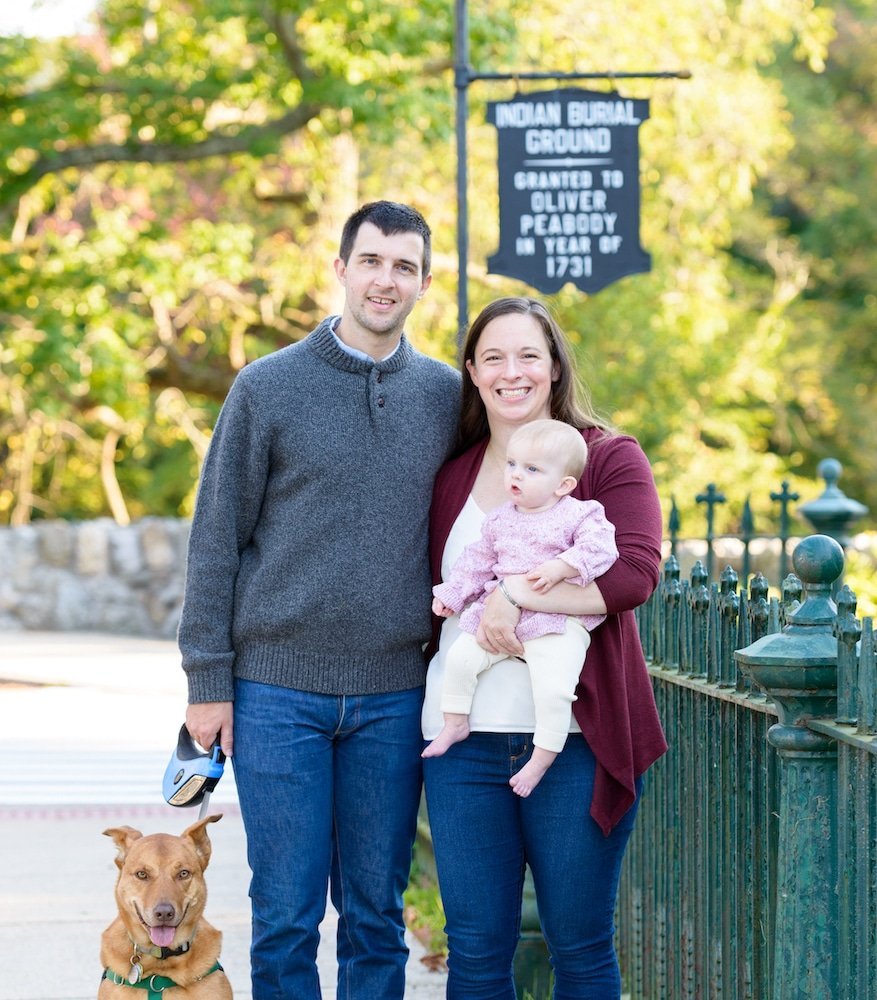 Working from home — with a newborn — sped up their timeline. But the moving process was smoother than expected.

Sharing a 700-square’ condo was perfect for Sarah Aspinwall, her husband, and their dog. While the couple loved their third-floor walkup in South Boston, moving was always in their future plans — and welcoming their daughter in January 2021 accelerated their timeline.

“We’d outgrown the space,” Sarah says. “One of us was in our living room working and one of us had the office — which was also the baby’s nursery. We were multi-purposing a lot of our home at that point.”

Three months later, the now-family-of-three started searching the Boston suburbs. The only problem? They didn’t know where to go.

After seeing Suburban Jungle mentions on a Facebook group, Sarah reached out and connected with Strategist Barbara Hirsch.

“For my husband and I who didn’t grow up in Massachusetts,” Sarah explains, “it made it so much easier to have someone say, ‘I hear all of your needs and here’s what I recommend.’”

“Sarah’s husband is a big biker, so being near trails and places he could bike was important,” Barbara explains. “They also wanted walkability — to be able to leave the house and walk to go grab a cup of coffee or a gallon of milk.”

The family was also looking for a Boston suburb with a vibrant downtown, strong school system, easy access to the outdoors, and plenty of space for their dog. They also wanted to be close to the train, ensuring city access was always on the table — and ensuring an easy commute once Sarah and her husband had to return to the office.

“I didn’t mind a 40 minute to an hour commute,” Sarah says,” but I did not want to transfer to three different modes of transportation.”

Narrowing in on Natick

Based on the family’s priorities, Barbara immediately zeroed in on ​​Natick, Milton, Arlington, Newton, and Malden. With those recommendations, Sarah scheduled “caravan tours.” While driving through each town on speakerphone, Suburban Jungle’s local partner agents shared more about each community, from where local kids go for ice cream to amazing brunch spots and places to cool off in the summer.

As they explored, Sarah and her husband “scored” each town on an Excel grid they created. Scores were based on a host of tangible and intangible qualities of the communities they visited, including what “felt right.” Though they loved several of the spots they saw, ultimately, Natick outscored the rest.

“It has a very small-town feel but still is a five-minute walk to our commuter rail to get into Boston,” Sarah says. “There’s also a great town center, lots of small, local businesses, and plenty of outdoor spaces, including a nature reserve.”

Once they decided on Natick, they turned their focus to house hunting — again, armed with their score sheet. On a Saturday in May, a house scored and beyond anything they’d seen.

“Our agent said ‘I think you should put the offer in tonight,’” Sarah says. “We had a family party that day, so we went and thought about it more. That night, we moved ahead with the offer — and it was accepted! The owners even shut down the Sunday open house. I couldn’t believe how smooth it all was.”

Settling into the Boston suburbs

Sarah and her husband let the sellers specify the close date, which may have helped their offer. But waiting until the end of July to move also worked out really well for them — they still needed to sell their South Boston condo. Barbara introduced them to a seller’s agent who helped get the family’s home listed and sold.

“Our close dates wound up being three days apart,” Sarah says. “It was just unbelievable.”

Now, six months into suburban living, Sarah and her family are loving life — and excited for what comes next, including renovations and exploring the local restaurant scene.

“Because we moved into a relatively new build, it’s a great blank slate,” she says. “We hired a local Natick mom who’s an interior designer to help us create the house we really want. It’s exciting. But, for now, we love the town and our neighbors are great. We’ve even gone into Boston a few times, and it’s easy to get in. Even our dog loves it. He loves doing nature walks in the preserve — which is right next to us. We’re thrilled.”