Discovering the Best of the Boston ‘burbs, in Beverly 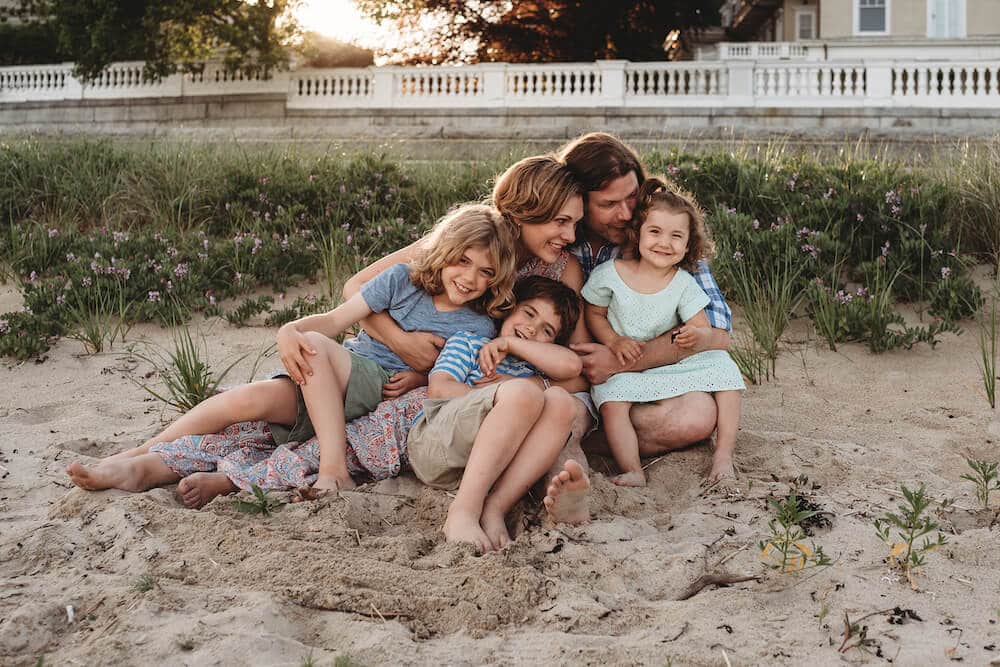 When Susanna Noon and her family — her husband Mike and their three young kids — started exploring the Boston suburbs three years ago, they planned to stay in Cambridge. “We had lived in the area for 10 years and owned our home for seven, and felt that the roots we had put down were worth preserving,” Susanna says. “However, it’s a very dense neighborhood, with mostly multi-family homes. Since one of our ‘must-have’ criteria for a new home was that it have four bedrooms plus space for me to teach birth classes, that was a difficult find in Cambridge. And with small kids, we didn’t want to do many renovations.” After connecting with Suburban Jungle Strategist Barbara Hirsch, the family expanded their search and, ultimately, settled in Beverly in July 2018. Now, nearly three years in their new community, Susanna and her crew are taking full advantage of everything the North Shore has to offer, from hiking and biking trails, to beaches, to tons of world-class cultural activities and events.

Loving life in the Boston ‘burbs!

Fast forward three years and the family is well acclimated into the suburbs. “We love Beverly,” Susanna says. “Moving here was a great decision for our family. It’s like living in a village inside of a larger community — so we have the benefits of living near a city and being adjacent to these big towns. At the same time, though, we have all of the perks of living in a small, tight-knit community. Coming from an urban environment, we really appreciate the balance.” That community, she says, has been especially important during COVID-19. “There’s a lot to do in Beverly — and there’s nothing you can’t find within a 15-minute drive, which is fantastic,” Susanna says. “It’s great, too, because we can go to the park and see the same families, or go to the beach and see people from the community. That’s been really important, first when we were getting acclimated, then when the COVID-19 closures started.” Susanna and Mike’s three young children are also happily adjusting to life in the ‘burbs. In Cambridge, she says, they were in a condo. Now they’re in a five-bedroom house with a big backyard, giving the kids plenty of space to spread out and play. They’re also walking distance to the train, the library, and two family-friendly restaurants.

Looking ahead, the Noon family is eager for warmer weather — and getting back to school full time. For the first two years, Susanna’s children attended a local private school. Now they’re enrolled in public school which, currently, is in hybrid mode. “We’re excited to get into the swing of things at school,” she says. “With a hybrid model and the limitations because of COVID, it’s tricky to meet in person — to hang out at drop off or pick up and chat with other parents. But everyone has been very warm and very welcoming, and there’s a lot of parental involvement in the district, which I love.” As she watches friends in Boston and Cambridge start exploring suburbia, she recognizes the same fears she had about making a move — and encourages them to think beyond their comfort zone. “Families worry about leaving the city and being in the middle of nowhere,” Susanna says. “But that’s not necessarily the case. If you want to be in a small, more rural community, you can find that in the Boston suburbs. But if you want to be more in-the-mix there are plenty of towns — like Beverly — where you can be close to the city and plenty of things to do. You don’t have to compromise. You can really find exactly what you’re looking for in the suburbs.”

4 Boston Markets That Keep Getting HOTTER

Whether you’re a newcomer or native, finding the perfect Boston suburbs can be a challenge in this historic city’s competitive housing market. Low housing inventory rates and high prices for minimal square footage are a real headache, which is why smart buyers are eyeing these four neighborhoods that keep getting hotter.

Boston’s oldest subway line, the Green Line, is undergoing a massive 4.3-mile expansion that will increase access for many of the city’s northern neighborhoods, Somerville included. The project will extend the line’s northern end beyond Cambridge beginning in 2021 and is already sparking a much-craved housing boom in the Boston suburbs.

Originally an industrial mecca turned single-family housing haven, Somerville is renowned for its All-American sense of community, diversity, gorgeous architecture and influx of biotech and life sciences companies. Bonus: It’s a 5-minute train ride from Harvard Square. P.S. Ask about Union Square. Somerville is also in the process of building a new high school, completed in 2021.

Another stop on the Green Line Extension, strategists agree Medford is one of Boston’s most exciting emerging real estate markets. Prospective buyers can expect to snag a stylish condo in the thick of things, making Medford an economical option 3.2 miles northwest of downtown Boston.

Beer enthusiasts and nightlife connoisseurs will delight in Medford’s vibrant Irish-American culture and, of course, pubs. Plus, as home to Tufts University, Medford is known for its young, fun persona characterized by students, academia and young professionals.

Move over Lexington and Plymouth, Arlington, one of Massachusetts’ most historic towns, is finally about to get the recognition it deserves within the Boston suburbs. Samuel Wilson AKA Uncle Sam hails from Arlington, and his memory is celebrated in many aspects of this community’s charm-filled way of life, from festivals and statues to the beloved Uncle Sam Plaza.

If Boston’s South Side is more of your stomping ground, you’re in luck, because Weymouth is taking off. Interest and housing inventory are on their way up in Weymouth, bolstered by tony new construction, and access to the Greater Boston area and Cape Cod via 3 MBTA commuter rail lines.

Find your balance in the Boston suburbs — or ANY suburbs! Get in touch now to schedule your free Suburbs Strategy session.