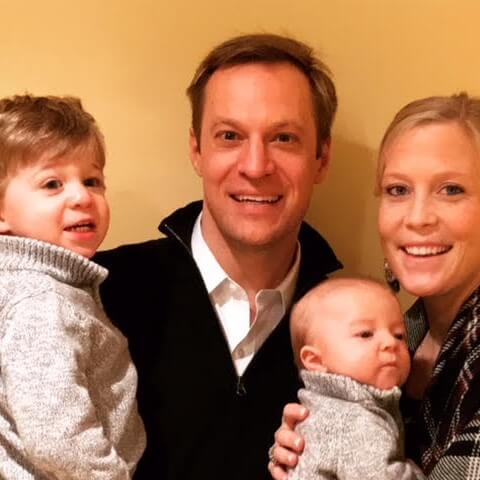 This Brooklyn family finds community, right on the water

“We needed more space and housing choices can become limited in the city when you get to that level,” mom-of-two MC Hooper says. The family had lived in the West Village before moving to Brooklyn Heights before their first son was born. “The two of us had grown up in the suburbs,” she explains, “and we wanted that for our kids, too. So we started looking outside of the city.” That’s when a friend recommended Suburban Jungle.

“We didn’t really know much about the towns outside of the city, except the town in New Jersey where my husband had grown up,” MC adds. “We reached out to Patti [Natiss, Suburban Jungle NYC Strategist] and she was super helpful in helping to determine what our needs were and helping us find good spots to look outside of the city.” Chief among those needs? A good commute—both MC and her husband work in the city.

As they started exploring the suburbs, MC says, they were open to anything and everything. “We looked in New Jersey, New York, and Connecticut. Patti suggested Summit and Chatham in New Jersey, Rye in New York and Darien and New Canaan in Connecticut.” Beyond the commute, they wanted strong schools for their growing family. “We really wanted a good school system for the boys—a competitive and highly-ranked school system was important, so that was a big factor.” They also wanted something family-friendly, with lots of young families and year-round activities, as well as strong sports program—the couple were both college athletes.

Ultimately, the family landed on two towns: Darien and New Canaan. After digging into the qualities of both communities, MC and her family chose Darien, citing the commute as a key reason. “We also loved the fact that Darien was on the water. My husband grew up with a lake nearby, and we spent summer vacations on the ocean, so we wanted something by the water,” she says. In late June, they made the move from Brooklyn to Connecticut. Her younger son—now two months old—was born post-move.

In the six months, the family has lived in Darien, they’ve already quickly adjusted to life in suburbia. “It’s amazing!” MC says. “We absolutely love it. We’re so happy where we are and the location. We can walk to the train station. And one of our really good family friends from Brooklyn is right across the street.” But their connections don’t stop there. “We’re surrounded by young families with kids our kids’ ages. They have a great newcomers group and working moms group, so I’ve very quickly and easily met people around town, and I really appreciate how active these clubs are.” Overall, “it’s been wonderful. Everyone is very open and friendly here.”

That said, MC and her family are happy they stayed in the city as long as they did. “We appreciated being in the city when our older son was very young,” she says. “The convenience was great. We had the pediatrician a block away and the grocery store downstairs. The park was a couple of blocks away and the subway was on the corner. It was so easy to navigate things with a very young child.” She advises city families to “stay in the city when your kids are very little,” because “it’s so easy. But now our son loves to be here and be outside, in the yard and playing on the swingset. It’s been so good for him.” The biggest surprise, MC adds, has been an incredible one—the sense of community they feel in Darien. “It’s been incredibly overly above and beyond what the city was in terms of community and in terms of finding families you can connect with and have a support system with,” she says. “The sense of community here is unmatched. If that’s what people are looking for, I’d definitely advise making the move for that reason alone.”