Diversity and an Artistic Vibe Lead This Family to Ossining 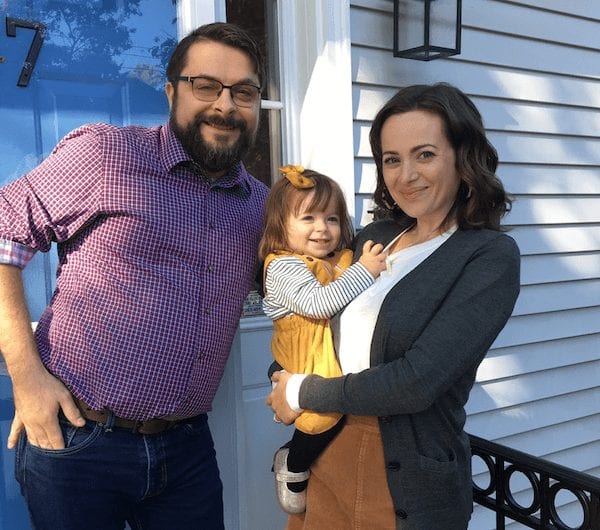 All it took was one town tour to find their perfect suburb.

Jessica Courtney and her husband Ryan loved the diversity, quick commute and food so much in their Queens neighborhood that, when they welcomed now 18-month-old Madeline into the mix, they simply upgraded to a two-bedroom in their same building. Soon enough, though, they realized that wasn’t enough.

“We love Queens and loved Sunnyside,” Jessica says. “But eventually we hit that breaking point I think a lot of city families hit. We didn’t have a washing machine in the unit, the elevator was always breaking down and, overall, we just wanted more space and more flexibility.” An actor, Jessica says she was also over carrying Madeline to and from auditions on the subway—“the stroller, the diaper bag, the toys…it’s a lot!”

That, she says, reignited their “should we stay or should we go?” conversation. In the past, Jessica and Ryan had only talked “very vaguely” about moving to the suburbs—though they knew when they did make the leap, Upper Westchester and the Hudson Valley were the places they wanted to search first. The family took frequent day trips to the area and loved it—they just didn’t think they could afford to buy yet. Regardless, though, Jessica reached out to Suburban Jungle and connected with Strategist Alli Levine to “officially” kick off their search.

Working with Alli, the family dug into their priorities, including a town with great schools—but not a pressure cooker environment—as well as a relatively easy commute to the city, so Jessica could keep auditioning and working. Jessica and Ryan also wanted a town that was diverse, something that they both loved about living in Queens, with green space and farmers’ markets. And because Ryan works remotely, they wanted him to have office space—and, ideally, be able to get to both the city and Albany for meetings.

“Alli’s town list was amazing,” Jessica says. “I did a ton of research and all of the communities were really great fits for us. We scheduled our first tour right away.”

An unexpected turn of events

“We arrived in the area for our first town tour — and we got there much earlier than we expected. So, we stopped by an open house and instantly fell in love. We actually felt like, this is it,” Jessica recalls. “We really liked the house and, more importantly, we loved the community.”

That town—Ossining—Jessica explains, has a sense of diversity, paired with a strong bilingual education program, something the couple wanted for Madeline. It also has a creative scene that really clicked with Jessica as an actor.

Even so, they kept exploring and researching other communities. Ultimately, though, their path led back to one place: Ossining—and to that very first house they’d seen.

“We made an offer in late August, closed October 21st and moved in the very next day,” Jessica says. “We’ve only been here for a few weeks, but we love it. It feels like Queens, without the city.” There’s also a lot to do both in Ossining and in neighboring communities—Jessica says, already, it’s clear that they can find anything in a sub-20 minute drive, versus 30- to 40-minute subway treks.

Making the leap to suburbia

Their decision was also confirmed on a recent trip—Madeline in tow—to Manhattan. Jessica and Madeline drove to the city in less than an hour, “then came home to peace and quiet,” she says.

Now happily settling into suburban life in Ossining, Jessica is helping her friends make the same leap. Her best friend, she says, is already working with Suburban Jungle, and she has several others in her inner circle starting to explore suburbia as well.

“I’m a type-A researcher,” Jessica says. “And that’s good and bad. Suburban Jungle set us in the right direction. Alli narrowed everything down and helped us strategize—and she really ‘got’ us. All of the suburbs she recommended were great fits for us.”