Find Your Suburban WHY: See the Unique Reasons These Families Made the Move 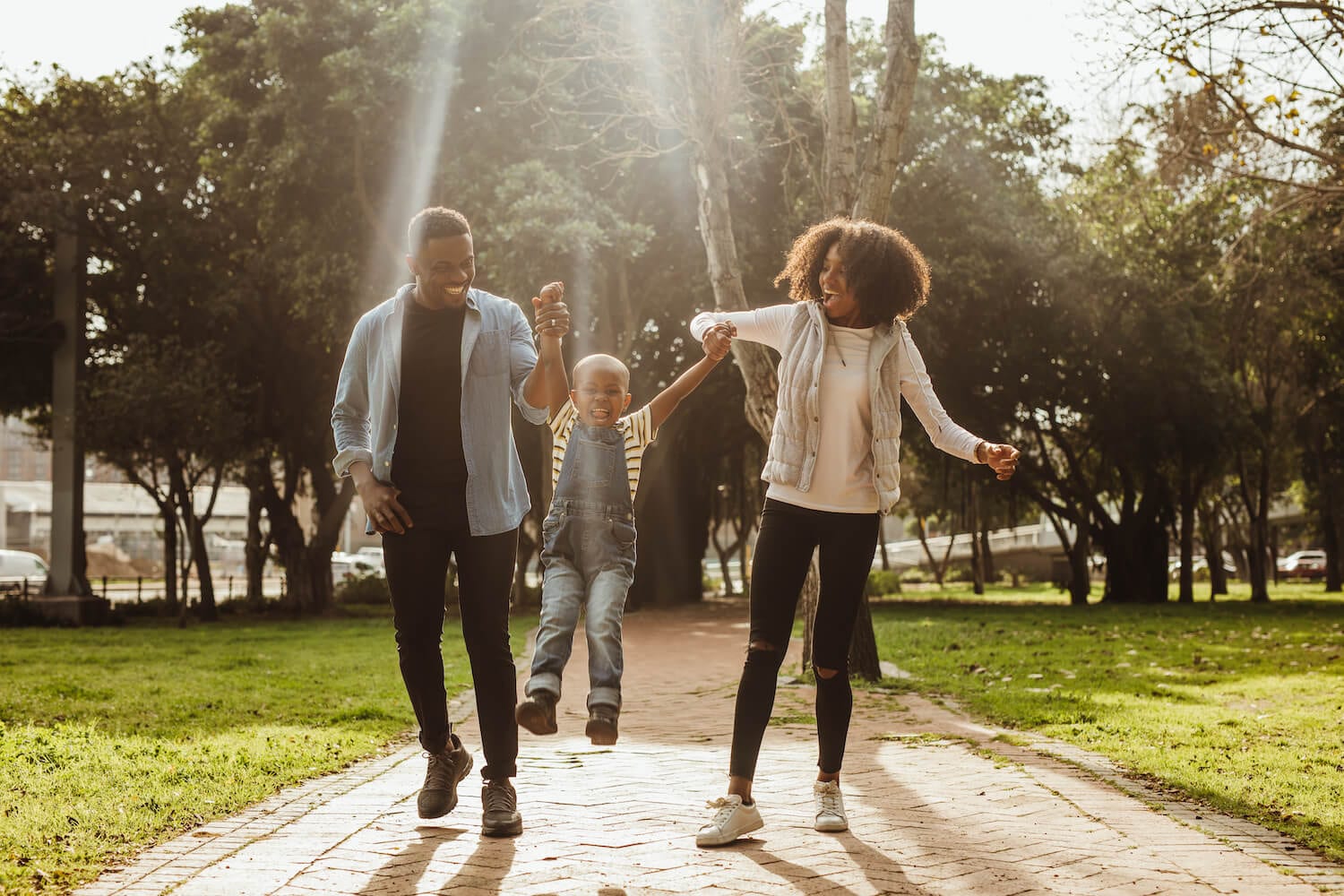 We work with countless families from coast to coast every year — and with every family, we get an opportunity to learn more about why they’re making the leap. Not only do we love getting to know every Suburban Jungle family, but it’s fun to discover brand new motivators for heading to suburbia. From the classics — preparing for a baby, job transfers and just needing more space — to truly unique motivators, we’ve heard it all. This year, though, we’ve heard so many “whys,” from the classics to the only-in-2020.

COVID-19 moved their summertime move up…
After exploring the suburbs with Suburban Jungle Strategist Maya Konig, Thailing Cahow and her family made an offer on a house in Ridgewood, New Jersey. They planned to close in March and move in summer 2020. Then, the COVID-19 shutdowns began.

After pushing the close by one week — a close that wound up happening via Facetime — the couple tossed everything they had into boxes and headed for the ‘burbs.

“We bought a car online and had it delivered. We grabbed a few things and we just left,” Thailing says.

When they first moved into their new home, she says, they didn’t have any furniture — but that gave their two kids lots more room to play.

“It’s a tough situation, but moving here has been an absolute blessing. The timing has been a miracle. We’re glad we’re here — and, at least until we have furniture, our kids think the entire house is a playground. And, hey — if they’re happy, we’re happy!”

They landed in a suburb that didn’t sync — so this New Jersey family tapped Suburban Jungle for a “redo”
Mindy Staloff and her family were eager to raise their now-two-year-old son in the New Jersey suburbs. The only problem? Their first move led them to a town that didn’t feel like “home.”

“That’s when we found Suburban Jungle,” Mindy says. “We just loved how it worked — the town-first approach made so much sense to us, and that’s what we really hadn’t done the first time around.”

Now the Staloffs are happily settled in Livingston — and haven’t looked back!

She didn’t know South Florida, but now she can’t get enough
Lifelong New Yorker, Melissa Scheider never imagined living anywhere but NYC and the surrounding area. She grew up in Queens and Long Island, then spent a decade in Manhattan before the family headed to Brooklyn and, ultimately, Long Island.

“My only Florida frame of reference at that point was Miami Beach. My grandparents were from Cuba and lived in Miami,” Melissa says. “We spent every break with them. But I knew nothing about Boca. I had to figure it all out—it was like a totally foreign land to us.”

After exploring virtually and then in person, the Schneiders landed in Delray Beach nearly three years ago. Now, as Suburban Jungle’s lead South Florida Strategist, she’s helping countless families discover the area ‘burbs — many making long-distance moves like she did.

In the beginning, they weren’t sure if they’d land in Boston or Chicago, so Kristen reached out to both offices. From there, she opted to start her search with Suburban Jungle Strategist Barbara Hirsch, in the Boston office. Weeks later, though, they got word they were 100% heading to Chicago.

“They wanted something like Glen Rock, where they lived in NJ,” Suburban Jungle Strategist Heather Jagher says. “They wanted a downtown, a strong sense of community and, in terms of the house, a relatively newer home. They were fine going farther out from the city to strike a balance. But, at the same time, Kristen’s husband will be working in the city, so he needed a reliable, comfortable commute.”

After touring several communities, Kristen and her husband fell in love with Glen Ellyn — and they’ve never looked back.

“Suburban Jungle knows what they’re doing,” she says, “and I’m lucky enough to have experienced their process from both sides.”

Searching for a spot between their parents — and their kids
With her next move, “ReSizer” Merril Nash was eager to be closer to family. After growing up in New York City, Merril spent several years in Connecticut before her family of four moved to Pittsburgh. Now, with their kids grown, Merril and her husband were eager to head back east, where they could be near their parents in Connecticut and Long Island, and their adult children, in Manhattan.

“Upper Westchester seemed like a great fit for them,” says Erika Ades, the Nash’s Suburban Jungle Strategist. Together, they quickly zeroed in on Bethel and Somers before making the move to the latter — specifically, to Heritage Village, a popular community in the area. “Heritage Village has a lot of great amenities and activities. It used to be a 55-plus community, but now you’ll find lots of families here, too. There’s tons to do and a lot of activities if you want to take advantage of them.”

Now settled in Somers, the Nashes are enjoying life in their community, and appreciate the proximity to their loved ones.

“Once you’re on the train it’s about 80 minutes,” Merril says. “We are close enough so going into the city really isn’t a big deal.” Even without leaving the area, she says, they’re close to everything they need. “We love being near DeCiccos—they have a great selection and it’s much closer than the grocery stores in Yorktown Heights. Right in our downtown there’s a CVS, a bakery and some restaurants, which are all great. And now we don’t have to drive nine hours for family functions.”

With two years to go anywhere, this Strategist landed in Austin
Suburban Jungle Strategist Katie Cranis and her family planned on staying put in the Bay Area suburbs — but decided to keep their options open.

“We initially planned to buy in the Bay Area, but felt like we kept missing our window,” Katie explains. “So we gave ourselves two years to keep renting and figuring out where to go next—and we opened ourselves up to pretty much anywhere.”

After exploring a number of markets, Austin kept popping to the top of their list.

“Everyone says hello,” Katie says. “Austin lends itself to being very community-oriented, which we love. And that’s huge for people moving here from other parts of the country — expect to be warmly welcomed and brought right into the mix, as soon as you arrive.”

They found the right town in an unexpected place
While Cody and Nick Oeser started their search they were focused on Berkeley. After starting and stopping, though, they weren’t entirely sure where to go — then they stumbled on Petaluma when Nick landed a job interview in town.

“That visit changed everything,” Cody says. “That sold us. There’s great food. It’s a very walkable community with an amazing downtown. And when we started looking at houses, we knew this was the town for us. We had no more questions or concerns in our minds.”

They found the town — then the house came on the market
“We loved Newton right away,” Abigail says. “We got a very clear picture of what life would be like here, and we also had a good sense of what we’d get at different price points — we basically went through all of Newton real estate in an afternoon and learned all about the different neighborhoods so we could make a smart decision for our family.”

Despite settling on the suburb, the right house didn’t come about immediately. But, for months, she kept her eyes on one house — and when it hit 100 days as “pending” in her dashboard, she contacted her Suburban Jungle agent.

“She immediately reached out to the seller’s agent and found out the sale had just fallen through. It felt like it was meant to be — it was the exact number of bedrooms we wanted, the right square footage, the right neighborhood.”

His military career sent them from coast to coast to coast
In 16 years, Sarah Warren and her family moved seven times — the most recent to Danville, California.

“We saw a house on Saturday and, by Sunday morning, the whole country was shut down. We made an offer and we got it. For the next few weeks we packed up,” Sarah says. “Then, two months after the accepted offer, we packed up a Pod, rented the largest Uhaul we could find and drove to Danville. We didn’t want to get movers because of COVID19, so my husband moved every single box and every single piece of furniture — with our daughters making guest appearances to get their stuff out and unpacked.”

Preparing for what comes next — and wanting to lay the foundation now
The Kornfelds always planned on raising their future family in the suburbs — and that meant making an “upgrade” in advance.

“We knew we wanted a family,” says Alec Kornfeld. “And to do that, we really needed an upgrade, size-wise. So we started exploring our options.” With an eye on top-rated public schools, a community vibe and access to restaurants, shops and parks, they wound up in Commack, New York — and quickly launched their now-thriving cookie business, The Kookie Jar LI.

A dream job offer drove this NYC family to the DC ‘burbs
Andrea and her husband Phil were searching in the NYC suburbs — then she was offered her dream job in DC.

“I was offered a job in DC in January,” Andrea says, “so we pivoted FAST.” After checking in with their NYC Strategist, they shifted focus, supported by Suburban Jungle’s DC office.

After traveling to DC twice the couple settled on Reston and made the leap months before she started her new job.

“Reston is a perfect blend of everything we wanted,” Phil explains. “Once we found our neighborhood and our house, we were in.”

They finally found their “balance”
Greg and Rebecca Young wanted to stay in the city — or go rural.

“I had been thinking about leaving the city — but going really far,” he says. “I wanted rural and was trying to talk Rebecca into Dutchess County. Looking back, I was definitely a little scared of the suburbs. I didn’t want to land in some generic town. So I assumed the only option was to go really far north — Rebecca, though, didn’t agree.”

With an eye on getting out, the couple wound up exploring Northern Westchester and the Hudson Valley — and that was it.

“The balance is here,” Greg says. “Rebecca knows everyone in the neighborhood and I have that privacy — and I don’t have a tenant living below me, so I can get up and stomp on the floors every morning! But overall, we have space to breathe and we’re close to everything we need—Whole Foods, Costco, Fairway, places to eat — and it just feels right.”

After years of on-and-off searching, this move felt right…
Mojgan Jelveh and her family loved life in San Francisco — but, even so, they always kept their eyes on the suburbs. Despite loving the pace and the unique suburban perks, they just couldn’t give up life in the city, including their five-minute commutes. Then, six years after first starting their search, a move to Orinda just felt right.

“It felt like the right time,” Mojgan says. “My oldest was going into sixth grade. My youngest was going into kindergarten.” Her middle — her son, Lucas — was going into fourth grade which, Mojgan admits, she was worried about. “It seemed like a tough year to make a move — but we did and it was fine. The transition to the suburbs—and to their new schools — was so much easier than I expected.”

Found your “why” — and ready to make a move? Get in touch now and schedule your Suburbs Strategy session. All of our services are 100% free.