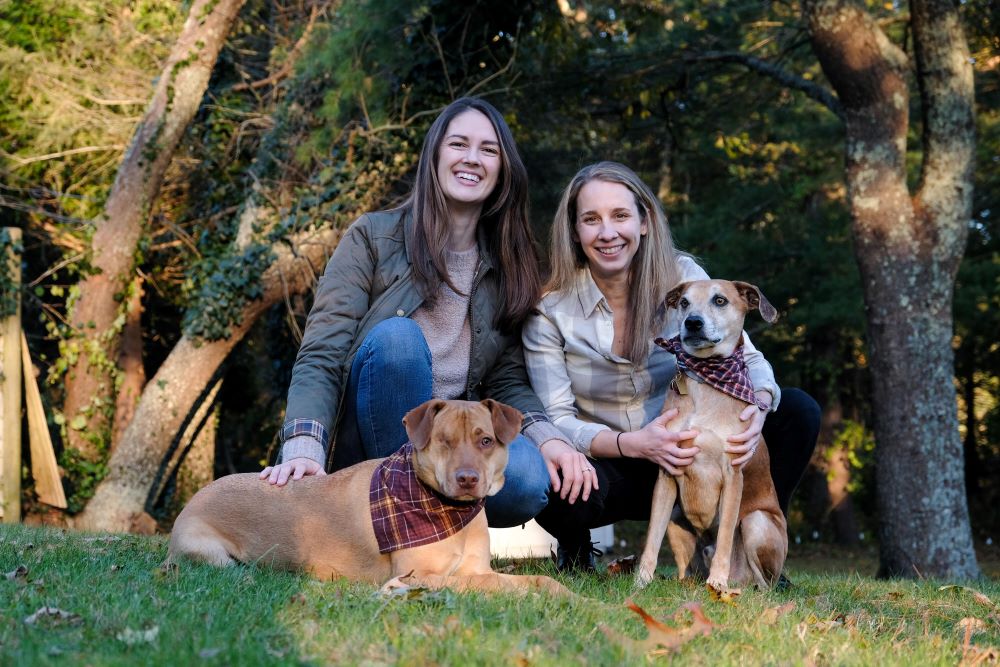 This couple found their perfect coastal town in the Boston suburbs.

“I always knew that I wanted to own a home. I like the city, it was so convenient, but there’s just something about having space between your neighbors,” Jacqueline says.

She and her wife, Lauren, had been living in South Boston together for years before finally making the jump to the suburbs in summer 2021.

“I had a harder time leaving the city,” Lauren says. “I moved here 10 years ago, from Texas, and loved living in Boston. But COVID made it clear we really needed more space.”

“We were at home all the time,” she says. “We have two dogs and we just needed more space and not to be on top of each other all the time. I had been sending tons of listings to Lauren already, trying to get her excited about moving.”

In fall 2020 they connected with Suburban Jungle and their Strategist Barbara Hirsch.

“We were ready to start looking. One of our friends bought a home and had worked with Suburban Jungle. It seemed like an easy next step,” Jaqueline says.

The first step? Determine the couples’ priorities and what they were looking for in a town.

“I really wanted to be close to the water,” Lauren says.

They also wanted an area with lots of activities and amenities — hiking trails, great restaurants, community events, and easy access to the city.

“We wanted something that was not just a starter home but had space if we wanted to start a family,” Jaqueline says.

With those goals in mind, Lauren and Jacqueline jumped in and started exploring suburbia. But, given their timing, the market was challenging. Even so, they didn’t let it stop them and continued digging into communities and, ultimately, homes.

“We had just been hearing from people how competitive the market was,” Jacqueline says. “So we kind of just knew we had to reset expectations going in if we actually were going to find a house.”

The couple initially focused on the South Shore towns of Marshfield, Scituate, and Norwell. At the same time, they kept their options open and explored some neighborhoods in MetroWest as well. Weekend after weekend they’d hop in their car and “caravan” around communities with their agent — she in her car, the couple in theirs, on speakerphone.

“We all got in our own cars and she drove us around town and showed us all the different neighborhoods,” Jacqueline says. “It was great to get those little details.”

In March 2021, a new listing hit the market in Duxbury. Although they hadn’t been considering this town before, their agent encouraged them to check it out because the house — and the immediate community — seemed like a great fit.

“So we did,” Jaqueline says.

While the house checked virtually every box — it was within walking distance of an elementary school and sat on over an acre of land — they wanted to do their due diligence to make sure the town was right for them.

“We saw the house and then we really started driving around the town and getting a feel for it,” Lauren says. “And it just felt right.”

They immediately put in an offer — but, since it was their first offer, they didn’t expect to get the house.

“Early on we agreed that, if there’s a bidding war, we’re going to drop out,” Jacqueline says. “We went in with our best and final offer, and we didn’t want emotions to get the best of us in this process.”

To their surprise, though, there was no bidding war. Their offer was accepted.

While Lauren and Jacqueline know how lucky they were to get the first house they made an offer on, they also acknowledge having the right mindset helped.

“For first-time home buyers, you can feel so much pressure,” Jacqueline says. “Do your best not to let the pressure take over. Your house is out there.”

The sellers also needed to find a new home, so both sides were very flexible from start to finish. Lauren and Jacqueline closed in June and moved in July. Now, eight months in, they’ve settled into their new home and are loving life in Duxbury — especially their dogs.

“We feel so happy,” Lauren says. “And the dogs love having a big backyard to run around in. Now, though, we’re ready to get out and start meeting people and getting out in the community. We’ve just been so in love with our house that we just haven’t left it!”

Find the right town — and house — for you. Get in touch now to schedule a free Suburbs Strategy session.