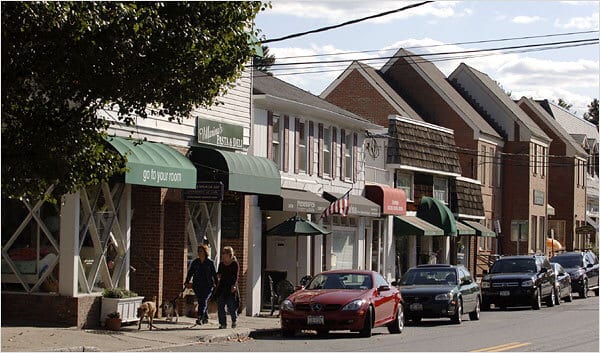 A small, family-friendly suburb with easy city access (and a President!)

Suburban Jungle’s Director of Business Development Michele Wolfberg loves living in Chappaqua—and it’s easy to see why! This family-friendly community is the perfect balance of laid back and super active, with tons to do, tons to see and, even, a President in the neighborhood…

While Chappaqua is a small town, there’s lots to do. We love all of the trees, green spaces and parks, which makes it a perfect place for families to kick back and relax. And, speaking of “green,” we have an amazing weekly farmers market where you can pick up local produce and other goodies.

Our downtown is also home to lots of quaint boutiques, shops and even blow dry bars. And, yes, we have an awesome restaurant scene—more on that in a minute…

In the summer, Chappaqua hosts a concert series which is great for residents of all ages. We also have an annual book fair featuring, literally, hundreds of amazing authors who are on-hand to sign books and chit-chat. Other must-sees include our Strawberry Festival and, of course, President Bill and Hillary Clinton’s annual walk in the town’s Memorial Day Parade. Not many suburbs can claim a President as their neighbor!

Our downtown also has a great foodie scene. There are lots of delicious local restaurants catering to any taste and trend. We’ve also got great coffee shops, food markets, bakeries, and gourmet grocers—you can literally get anything here, including trendy treats that have migrated from the city to suburbia.

An A+ for the schools…

We have six highly-ranked schools in the Chappaqua Central School District—which, BTW, ranked #14 of 675 New York districts in Niche’s 2019 rankings with all six schools scoring a coveted “A+” in their rankings. Our high school ranked #2 in the county—we’re definitely proud of that!

These schools get an A+ from parents who love the small class sizes.

This year 21 graduates of our high school are attending Cornell University, and lots more are heading to other amazing Ivy League colleges.

The district also offers full-day kindergarten and busing to and from school as well as to some after-school activities—think gymnastics, tennis, art and religious school, among others. There’s also a great aftercare program for working parents.

While there’s A LOT that really wows in the Chappaqua school district, the innovative technology is truly impressive. These programs continue to evolve within all of the schools and grade levels. The Chappaqua School Foundation is a big contributor to many of these school programs and funds lots of teacher-proposed grants, helping classes take advantage of incredible opportunities beyond the scope of the school budget.

And don’t forget about preschool!

On the preschool and preK front we have lots of great options to choose from including:

That’s just to name a few…

Commuting into the city

Another reason so many city families flock to Chappaqua? The commute. There are 14 express and local trains into and out of the city during rush hour which run around 50 to 60 minutes. Another perk? There are plenty of monthly parking permits available to residents, so new families can easily snag a spot at the station.

Camp is a big deal here and many kids head to day camps including Mohawk, Breezemont, Nabby, Elmwood, Kiwi, and the local town camp. All offer bus service in and around Chappaqua. Most families do stick around in the summer—there’s a lot to do and it’s really fun here, so I’m not surprised!

In addition, there are several local pool and tennis clubs to choose from—many women in town play on tennis teams here. There are also men’s softball leagues that play at night and weekend basketball and soccer leagues for adults as well. It’s fun to see all of the games happening, especially on a nice summer night.

Chappaqua is definitely an active town and, in addition to sports leagues, there’s lots of golf—both private and public courses—and hiking trails at Rockefeller State Park as well as North County Trail.

Want to check out Chappaqua or ANY of the suburban hot spots just outside of city limits? Get in touch to learn more and schedule a session with your Suburban Jungle Strategist.