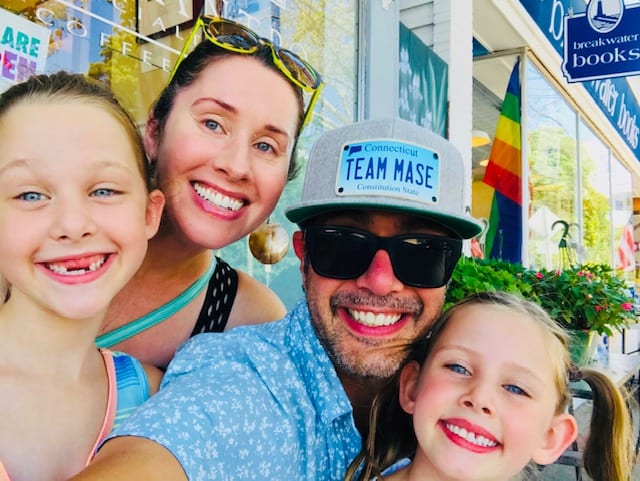 For Erica and her family, the choice was clear: stay in the city or head to the “real” suburbs.

After living in Manhattan for over a decade, Erica wasn’t quite ready to make the jump to the ‘burbs — so she and her family moved to Jersey City for a few years, with an eye on an urban-meets-suburban experience.

“We loved Jersey City but, quickly, we realized we needed to be in Manhattan or the ‘real’ suburbs,” Erica says. “That’s when we decided to start exploring what life could be life in suburbia.”

Having grown up in Connecticut, Erica was immediately drawn to the area — but didn’t know where to start. After connecting with Suburban Jungle Strategist Maya Konig, though, the family quickly found a path forward.

“Maya was spot on,” Erica says. “She really dug through everything and, quickly, it seemed like Fairfield was the right direction for us — and she was right. After exploring other Connecticut suburbs, we kept coming back to Fairfield.”

Ultimately, Fairfield was the Mason’s final pick — and they quickly found a home and made the move.

“It’s been 18 months and we’ve been living the dream ever since,” she says.

Since moving, Erica has also been helping other city families explore their options and, specifically, learn more about life in Fairfield.

“I think there’s this preconceived notion that there’s nothing once you leave the city,” she says. “I love talking to city families about how much there is to do here — we have everything from theater to live comedy to music venues, and the restaurants are amazing.”

That, though, isn’t the only perk of living in Fairfield. For Erica, the community aspect has been central to their quick acclimation.

“From the day we stepped foot into our neighborhood, we’ve made more friends than we’ve had in the last 10 years,” she says. “There was no ‘learning curve.’ I just loved Fairfield from the day we got here.”

Despite moving just three months before COVID-19 shutdowns, Erica and her family were able to get to know the area and their neighbors quickly — and even after, it was easy to get in the swing of Fairfield life. With so many families out taking walks and bike rides, the Masons could easily strike up conversations and get to know people in their immediate neighborhood and beyond.

“I’ve never felt so social and like I’ve met more people in my life, and it’s just because people are still walking. They’re still outside. It’s so community-oriented, people hang out in their yard and chat.”

Erica’s kids also had no trouble building a social network in Fairfield.

“Fairfield has an incredible school system and an excellent rec program,” Erica says. “Most of the kids do some sort of rec center program.” Her kids, she adds, just started tennis, softball, and Girl Scouts — and, this summer, will be going to camp in town.

Beyond just the community feel, Erica also loves the convenience of being in suburbia — something she admits she didn’t expect.

“I thought things would be harder because you have to drive everywhere,” Erica says. “For me, it’s the opposite. It’s so much easier to keep essentials in my car and not have to carry everything everywhere — especially with the kids. It’s also so easy to hop in the car and run to the store, versus having to walk or take the subway.”

In 2020, Erica decided to share her experiences in Fairfield and joined the Suburban Jungle as a Local. Now, she connects directly with families considering Fairfield and shares her behind-the-scenes insights and first-hand experiences living in this amazing community.

“I love it here and I love sharing my own experiences with city families — I get where they are because we were there, too, not that long ago,” Erica says. “It’s so important to have all the information before you make a move — that’s why I’m here!”

For those considering Fairfield, Erica always suggests coming back a few times — spending a weekend in town, if possible.

“I always tell families to start out downtown and grab lunch. There’s a local deli that everybody goes to, it always has a massive line — but we used to spend the wait chatting with people and asking about Fairfield. Everyone was so happy to share. People immediately understood what it’s like to be in the city and thinking about suburbia — and they would give us the inside scoop.”

Find the perfect NYC suburb for your family. Get in touch now to schedule your FREE Suburbs Strategy session.