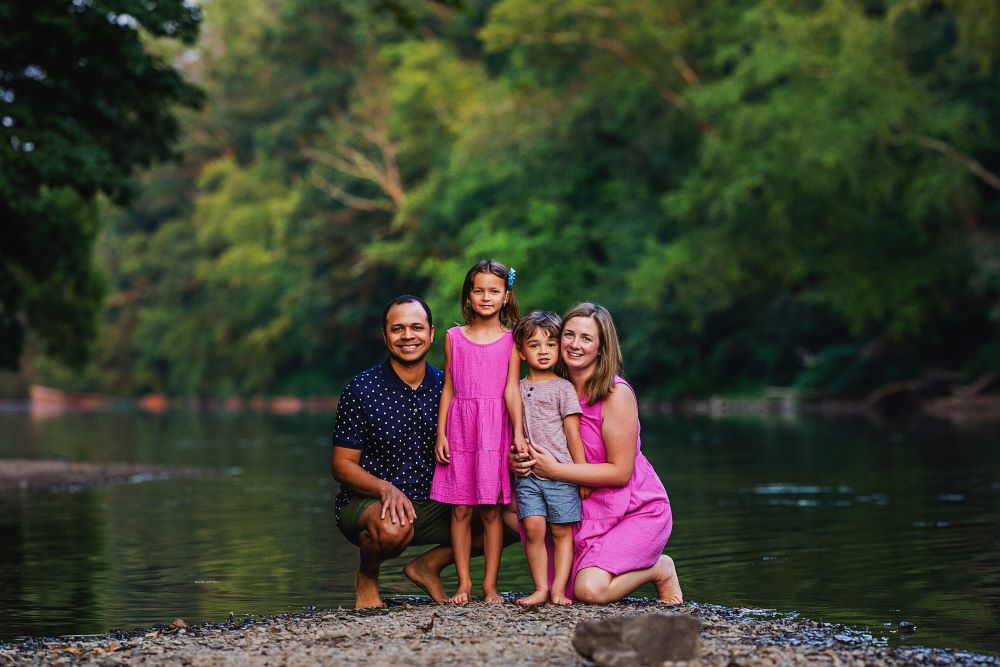 Despite the hectic housing market, the Miguel Family landed in the right town for them.

Toni Miguel accepted a new job in Pennsylvania in February 2020. At the time, Toni, her husband, and their two kids were living in North Carolina. After six years in the south, they were ready to be closer to family in the northeast — and after Toni accepted a job in Malvern, Pennsylvania they were ready to dive into the move. But the start of the pandemic in 2020 made things complicated.

“I was planning to come up in March 2020. That didn’t happen,” Toni says. “So we made the move blind. We put our house on the market in North Carolina at the end of May. And then we decided to go up to my mom’s house in New Jersey.”

Narrowing in on Main Line

Toni and her husband were both originally from New Jersey. Given the proximity to Philadelphia, both were familiar with the general area, but didn’t know the suburbs well.

To help them get to know the lay of the land, the family headed to New Jersey, staying with Toni’s mom so they could explore the Philadelphia suburbs in person. They also connected with Suburban Jungle Strategist Jodi Bloom to help dig deeper.

“We used Google Maps to try to walk around an area to see what it looked like,” Toni says. “It was tricky. But we did as much research as we could.”

With Jodi’s help, they were able to accelerate their search.

“When I connected with Toni, we quickly zeroed in on what mattered most to them,” Jodi says. “They wanted a friendly, welcoming neighborhood with great schools. Since Toni was working in Malvern, we also made sure to consider the commute — so, for them, Main Line towns made sense. The area really checks all of their boxes.”

The family also wanted to be close to Toni’s sister-in-law, in the city.

“As we started exploring the area more, we also realized how important walkability was — and we wanted a strong community feel,” Toni says. “We wanted our kids to be able to play outside with friends,”

With these priorities in mind, the family’s list began to narrow, with Bryn Mawr, Wayne, Berwyn, Villanova, and Ardmore popping to the top.

Despite having a good sense of where they wanted to be, given the COVID-powered housing market finding the right home was a challenge. By August, they’d made offers on four homes, but were still searching.

“We went back and forth a lot and wondered if we’re even going to be able to make the move to the Main Line,” Toni says. “As summer went on, it became clear that we weren’t going to be going back to the office anytime soon. And the housing market was so difficult we considered just staying at my mom’s in New Jersey. I even enrolled my daughter in school here.”

But they kept searching. Before calling it, they happened to tour a listing in Wayne.

“After going back and forth and looking at properties, we started to realize that Wayne could be our spot,” she adds. “While the house wasn’t right for us, I kept saying to my husband, ‘I wish a house on one of these little streets would go on the market.’ This is such a cute place to live.”

Days later, a house on one of “those cute little streets” in Wayne hit the market.

“We knew it was going to be a really hot property,” Toni says. “We really loved it and put in a strong offer. And we got it!” Ultimately, there were 15 other offers on the property.

Settling in the Suburbs

Despite the chaotic market, Toni and her family finally found the house — and town — that was right for them.

“It was exactly what we wanted,” Toni says. “When we got the offer accepted, I was really floored.”

The family closed in October and, one week later, moved into their new Wayne home.

“We moved in on Friday and our kids both started their schools on Monday,” Toni says. She also enrolled her son in daycare, just ½-mile from their house.

For others going through a stressful moving process, Toni suggests, “practicing self-care.” She adds, “try not to take everything so personal and understand that it’ll happen.”

Looking back, Toni is glad they stuck to their priorities and didn’t let the stress of the pandemic housing market influence their decision-making.

When it comes to making a move, you don’t have to go through the process alone. We’re here to help you every step of the way. Contact us today to get started.