From Brooklyn to East Nashville to Evanston… 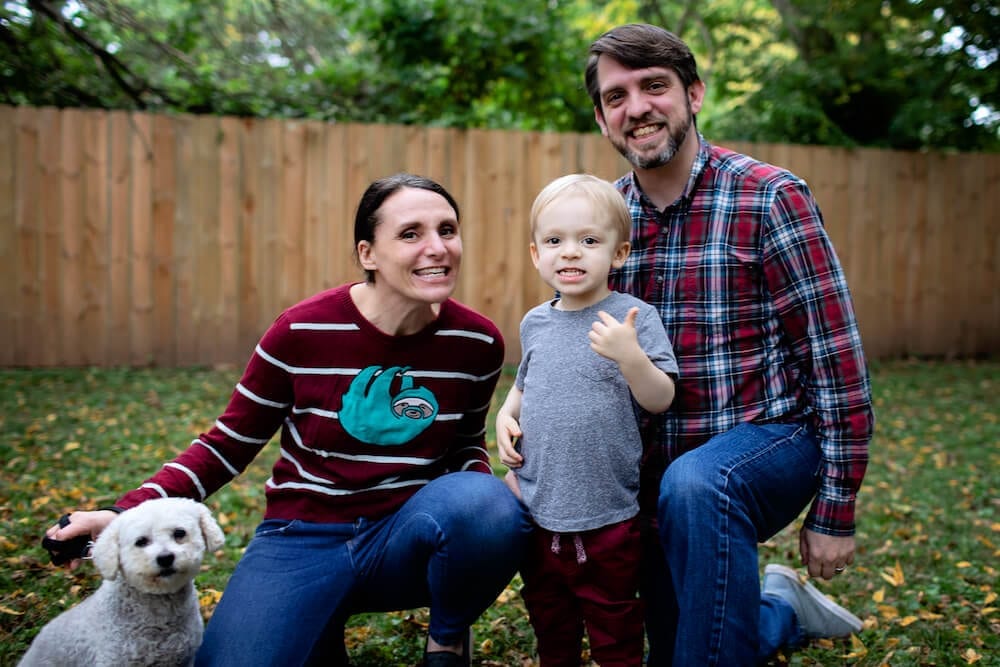 Laine and her husband Patrick aren’t strangers to major moves.

“We started in New York,” Patrick says, “and wound up in Nashville in 2017. We’d never even been to Nashville, but wanted more space and thought Nashville sounded interesting — but the first time we explored was when we were looking for a place to live.”

Ultimately, the couple settled in East Nashville where they welcomed their now three-year-old son Jack.

“East Nashville definitely had a Brooklyn vibe, and we were about three miles from downtown on a quarter-acre lot,” Patrick adds. “It was a really nice space and we liked living there — we made friends with other young families and got to know the area. It was a lot of fun.”

Looking for their next urban-meets-suburban community

Soon enough, though, the pull to be near family and long-time friends was too strong to resist and the couple revisited their next steps. Quickly, the Chicago suburbs came up — they had friends and family in both Chicago and Evanston. Laine had even been born in Highland Park and lived there until she was five.

“We just started looking — remotely at first — and Patrick got a job up here,” Laine says. “So we dove in head-first, then connected with Heather Jagher, our Suburban Jungle Strategist, through a friend of a friend.”

That, Laine says, accelerated their search and helped them get to know the suburbs first-hand, including Evanston.

“Laine and Patrick wanted a good mix of urban and suburban,” Heather says. “They’d lived in New York, they’d lived in Nashville, now they were exploring Chicago — and they knew they wanted a suburb that had more of a ‘downtown’ vibe. Something that felt a little more urban with lots to do. They also wanted to be close to public transportation and ensure they had good schools in their community — Jack’s just a few years away from kindergarten.”

The more the family searched, the more they kept coming back to Evanston. Being in Nashville, they add, having both Heather and their Suburban Jungle agent Julie on the ground in Evanston made a huge difference in finding the right house, now that they’d found the right town.

“We virtually toured a few houses via Facetime, and that was a huge help,” says Laine. “We also had Suburban Jungle helping us see what we couldn’t just look online or at listings — like, one house was listed as a four-bedroom but, really, it was a two. Being so far away having people support us like that made a huge difference.”

In September 2020 Laine and Patrick made an offer on a house in Evanston — sight unseen — and closed in early October. Suburban Jungle even connected them with a contractor to oversee some of the work pre-move — refinishing the floors and painting, for starters.

“We got so, so lucky,” Laine says. “It’s crazy how much we love this house considering we never saw it in person before we moved in. But no way we could have done this without Heather’s help. Suburban Jungle was our local expert. Now we’re here and we love it and our house feels fresh and brand new.”

The timing, they add, was ideal — immediately after their offer was accepted, every other Evanston home they’d looked at went into contract within days and the market has been extremely tight ever since.

“We finally have space,” Patrick says. “We went from a 450-square-foot Brooklyn apartment to a 1,200-square-foot house in Nashville, and now we’re in Evanston with enough room for Jack to play and for both of us to work from home. We have a yard, the dog can run around. As Laine said, we feel very, very lucky to be here, especially now.”

They’re also grateful for all of the amenities and activities right outside of their home — everything from global restaurants to A+ preschools to amazing parks and playgrounds. Also, being close to Northwestern University, the family will soon be able to take advantage of on-campus activities, including kids’ theater performances, festivals, and more. They’re also close to family, which had been top of their list.

For now, though, Laine, Patrick, and Jack are still exploring and getting ready for warmer weather.

“We take car rides — it’s a beautiful area to drive around, with lots of cute small towns just a few minutes away,” Laine says. “We can’t wait to really be out. This is an incredible community for families and for kids.”

Looking back, Laine and Patrick are grateful for connecting with Suburban Jungle and with Heather.

“They have a sense of what the communities really are,” Laine says. “From there, we were able to take that and dive deeper. Plus, we had an agent who was always willing to hop on Facetime and give really honest feedback — as well as the facts, figures, and everything we needed to make that final decision. It was so helpful and we couldn’t have done it — at least not this well — without them.”