The Chicago Suburbs — By Way of Brooklyn 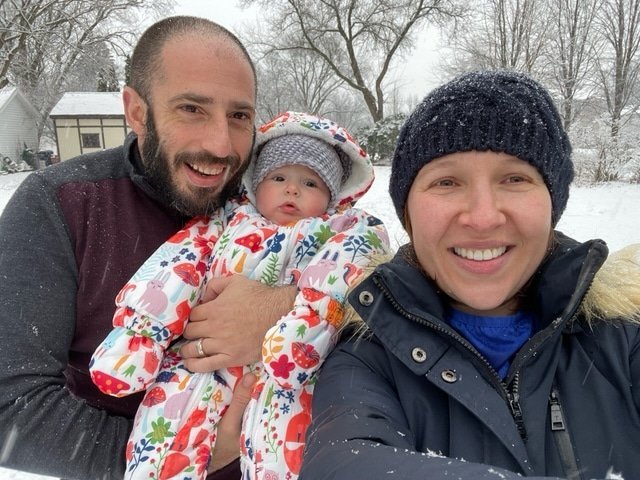 Kira Zumergrad-Pahl and Joe Pahl always wanted to find their way back to Chicago. In their eight years in the city, they’d met and went on to build an amazing community. In 2013, though, the couple picked up and headed to New York — though it was never meant to be a permanent move.

“When we moved to New York, the timeline was three to five years. But life gets in the way,” Kira says. “So six, seven years went by and we were in Brooklyn. But we still knew we wanted to get back to Chicagoland.”

When remote working became a reality, she adds, they saw their opportunity.

“We were able to work remotely,” she explains, “and were expecting our first child — so we knew we had to move quickly to make it happen.

The first step: figuring out exactly what they wanted this time around.

“We knew we wanted to be in the suburbs,” Joe explains. “But we were going back and forth between the northern suburbs and the western suburbs. Both had different pulls — that’s when we called Suburban Jungle.”

Their Suburban Jungle Strategist Heather Jagher jumped in and was immediately able to help them sort through the pros, cons, and other unique considerations.

“They had friends in the western suburbs, so being in that area was very appealing,” Heather explains. “They also wanted a bit more land — they’d been in Brooklyn for so long, that it was time to spread out, especially with a new baby. Strong schools, a walkable downtown, and easy city access also topped the list.”

After touring several towns, Kira and Joe left their Brooklyn apartment in February 2021 and headed to Chicago, opting to rent in Oak Park while they continued exploring neighborhoods.

Sticking with their “must-haves”

Once in Chicagoland, the Pahls quickly zeroed in on the western suburbs — and they soon fell in love with Glen Ellyn.

“We immediately knew this could be it,” Joe says. “There are parks everywhere and there’s a great downtown.”

With Kira’s August due date fast approaching, the couple started making offers, hoping to be in their new home when the baby arrived. But in the pandemic market, they were losing out on one house after the next.

“It was discouraging, but we knew we needed to have patience,” Kira says. “We didn’t want to give too much — we knew what we wanted and we knew we just might need to wait for it.”

“Both of us at the end of the day really wanted to have a big yard,” Joe says. “And we were pushing ourselves to continue to look at a lot of houses that didn’t have that. Be honest with yourself about what you want your place to look like — and don’t settle.”

Their focus paid off. Just weeks before welcoming their daughter, the family moved into a house in Glen Ellyn.

Months later, the new family-of-three is loving every minute in their new neighborhood.

“It worked out so well,” Joe says. “Our yard backs up onto a cul-de-sac — and there are three babies our daughter’s age. Besides that, our neighbors are the nicest people in the world. We got so, so lucky.”

The family is also looking forward to the warmer weather so they can explore the nearby parks and community pool.

“It can be a tricky market,” Heather says, “but Kira and Joe were patient, focused, and well-aligned with what they wanted. And they got it!”

To families looking to make a move, both Joe and Kira encourage a similar approach — to looking for the right neighborhood first, and being clear on your must-haves.

Find the neighborhood — and the house — that’s right for you and your family. Get in touch now to schedule a free Suburbs Strategy session.