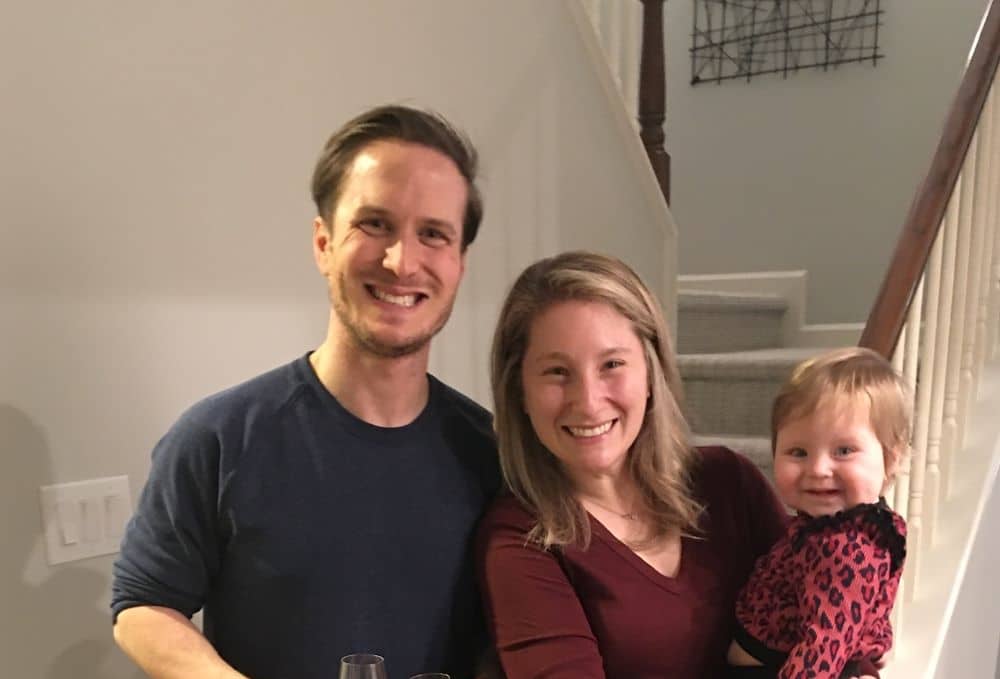 After months of on-again-off-again searching across a broad range of suburbs, this city family settled in Rye Brook

Like so many city families, Craig Jacobs and Kate Bartow were hesitant about moving to the suburbs. The couple spent nine years in the city together, first in the East Village and then on the Upper East Side.

“I was terrified of leaving the city,” Craig says.

In 2019, Craig and Kate started “casually” looking in the suburbs — nothing, though, immediately clicked.

“In 2020, we found out that we were pregnant with our first,” Kate says. “So that definitely accelerated our move!” Up against this new timeline — and a hyper-competitive pandemic market — the pair reached out to Suburban Jungle.

During their initial call with Suburban Jungle Strategist Alli Levine, Craig and Kate talked through their wants, needs, and goals — specifically, a quick commute, a strong sense of community, A+ public schools, and walkable downtown.

“Craig and Kate were really excited to dive in,” Alli says. “They were open to Long Island, Westchester, and New Jersey — and really wanted to do their due diligence.” Craig, she adds, is from Long Island but, even so, wanted to make sure they truly investigated and understood their options.

After their initial conversation, Alli developed a comprehensive search strategy, including some “must-see” towns. Rye Brook, she says, immediately stood out, though.

“I remember Alli saying, ‘I think you’d really like Rye Brook,’” Kate says. “She mentioned the new developments and all of the things to do. I definitely remember looking forward to visiting.”

Armed with their initial list — and paired with local partner agents to help them explore each town — Kate and Craig dove into their Westchester tours. Concerned about proximity to the city, though, they quickly shifted gears and focused on Long Island and New Jersey. Nothing immediately resonated.

“After we toured each town, we would connect with Alli,” Kate says. “It was the best part — we could be totally honest with her, tell her our reactions, ask our questions, and really reset each time.”

As they explored town after town, they began to reconsider Westchester. Once they “officially” toured Rye Brook — Alli’s initial recommendation — they knew.

“Out of everywhere, Westchester just felt right,” Craig says. “Then, we started really exploring Rye Brook, and we knew.” The amenities and amazing sense of community, Craig says, far outweighed the extra minutes on MetroNorth.

Finding the perfect home — and making a move fast

After settling on Rye Brook, the couple paused their search until summer 2021.

“We planned to restart our search around Labor Day,” Craig says, “but the inventory was so limited, we were starting to get nervous.”

One day in October 2021, though, their agent called with an interesting new listing: a townhouse in her former development. Kate rushed from the city to Rye Brook to check it out, the same day. The only problem? Craig was on jury duty.

“I walked into the house and was like ‘this is our house,’” Kate says. “And of course, I can’t even connect with Craig because he’s on jury duty. But I moved ahead anyway — on the way home I called our financial advisor and our mortgage lender. Then I picked up Craig and the baby and headed back to Rye Brook so they could see the house.”

That night, they put in an offer — slightly above ask, at their agent’s recommendation.

“She said it was a sign of goodwill,” Craig says. “But, even though we went over, the sellers still decided to have an open house that weekend. So — and, again, at our agent’s suggestion — we put in a second offer, a bit higher. And they accepted it!”

Despite having an accepted offer, he says, the open house still went on — and the sellers received an all-cash offer for an even higher amount. Even so, their offer stuck.

“If it wasn’t for Suburban Jungle and our agent — her advice and guidance — we’d still be in the city right now watching mortgage rates go up and no inventory go on the market,” Craig says. “With every day that goes by, we’re even more thankful that it worked out because it keeps proving to be the right decision.”

Craig, Kate, and their daughter are now happily settled into their new Rye Brook home — and aren’t looking back.

“I love being in Westchester and near so many things,” Kate says. “It’s so centrally located. Rye Brook is amazing, but we’re so close to Rye and White Plains and Greenwich, even. So we have access to everything.” It’s also a quick drive to Craig’s parents, on Long Island.

The development, she adds, has also been ideal. It’s low maintenance and the shuttle to the train has made Craig’s commute even easier. They’ve also met several young families, right in their neighborhood.

“The ease of life, I think, is what we really like about it,” Craig says. “Things get harder when you’re raising kids in the city. It’s nice to have it a little more calm and quiet.”

Looking back, they’re thrilled with how the process panned out — and have plenty of advice for other city dwellers considering making a move.

“First, have an idea of what your costs are going to be because there are a good number of things that we did not think about,” Craig says. “Property taxes, utilities, all of that.”

Both Craig and Kate also suggest touring towns with an expert.

“Visiting a town by yourself is not the same,” Craig says. “It’s good to have someone you can bounce things off of and ask questions.”

Above all, he says, have an open mind.

“It’s a blessing and a curse how many different suburbs there are in the New York City area,” Craig says. “Be open to the possibilities. The more open you are, the more likely you are to find your perfect spot.”

Finding the right town is about more than just commute times. Let’s talk about all your priorities so we can help you find a neighborhood that feels like home. Reach out today to get started.