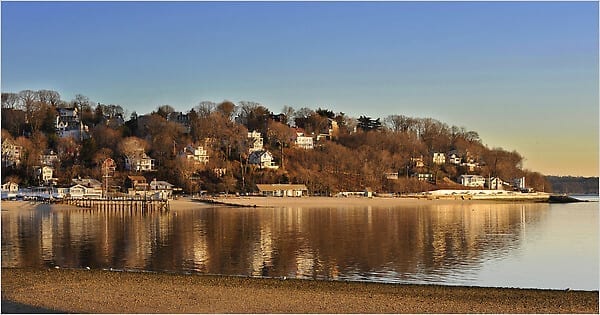 City families are flooding this hip, artsy community on the North Shore

More and more city families—Brooklynites, in particular—have been flocking to this unique North Shore town in recent years. And they’re coming with good cause. Dubbed a “gingerbread-laced village” by The New York Times, this one-square-mile suburb has a decidedly artsy vibe, accented by its Gothic and Victorian “painted ladies” and a quirky downtown lined with small shops and cafes.

That, though, is just the beginning of Sea Cliff’s appeal. Close to Tappen Beach, families can enjoy waterfront views and, even, moor boats. There are tons of community activities including a popular farmers market, annual pub crawl and massive town garage sale, that draws shoppers from Long Island and NYC alike. And, for newcomers, opportunities to mix and mingle abound—every October, new residents are invited to a party at a neighbor’s home, where they meet town decision-makers and local politicians, as well as the popular librarians.

Even a quick drive through Sea Cliff and it’s clear this town is nothing like typical Nassau County—it’s even a complete departure from neighboring suburbs including Glen Cove and Glen Head. That, though, is the bulk of Sea Cliff’s appeal, and what helps lend to its bohemian, laid-back vibe residents love.

Head to Memorial Park—AKA “Hippie Park”—for beautiful views of Hempstead Harbor. On Thursdays in the summer, grab free cookies and lemonade and check out concerts in the park. At Sea Cliff Beach, concerts happen again on Fridays, and there’s always live music somewhere in town—The Oak Room and Still Partners are popular food and music venues.

Downtown Sea Cliff is lined with cool eateries, cafes, coffee shops and restaurants. The Oak Room, The Metropolitan and Still Partners are popular among families and millennial residents alike.

ALL ABOUT THE SCHOOLS

All schools in North Shore get an A+ from Niche. The high school is known for its IB program, which replaced AP as the college prep program of choice, as well as its STEM program—a program that ranks in the top 150 in the country.

In addition to waterfront access for boating, kayaking and more, Sea Cliff boasts a very active North Shore Baseball & Sea Cliff Softball league, for kids in preK through 8th grade. Given the mix of towns in the school district, Sea Cliff kids also have lots of options to participate in Glen Head and Glen Cove sports, alongside their current and future classmates.

Gold Coast Soccer in Glen Cove and North Shore Soccer Club in Glen Head are popular go-tos, as is the Glen Head Racquet Club for tennis lessons and CYO basketball. There’s also a popular local lacrosse program for both boys and girls starting in kindergarten,

Starting in fourth grade, girls can jump into volleyball and field hockey. Many programs are run by the high school coaches, helping kids transition from community sports into interscholastic sports.

Sea Cliff is one of the farther-out stops on the Oyster Bay line. In the morning, one 6:08 train is direct to Penn, as is the 6:16 out of Penn at night. Otherwise, be prepared to transfer at Jamaica—and to spend about 55 to 60 minutes on the train each way.

That said, there’s ample parking at the station—and with your parking permit, you can parking at any Town of Oyster Bay lot which includes Glen Cove, Glen Head, Hicksville, Syosset and other stations. That’s a win should the Oyster Bay line go down—you can easily drive to Syosset or Hicksville and jump on a different line.

In addition to Sea Cliff’s bohemian culture and incredibly artsy vibe, the town’s history is a pride point. Fifty-four buildings have local landmark status—29 are on state and national registries.