Grab a Pint in the Boston Suburbs 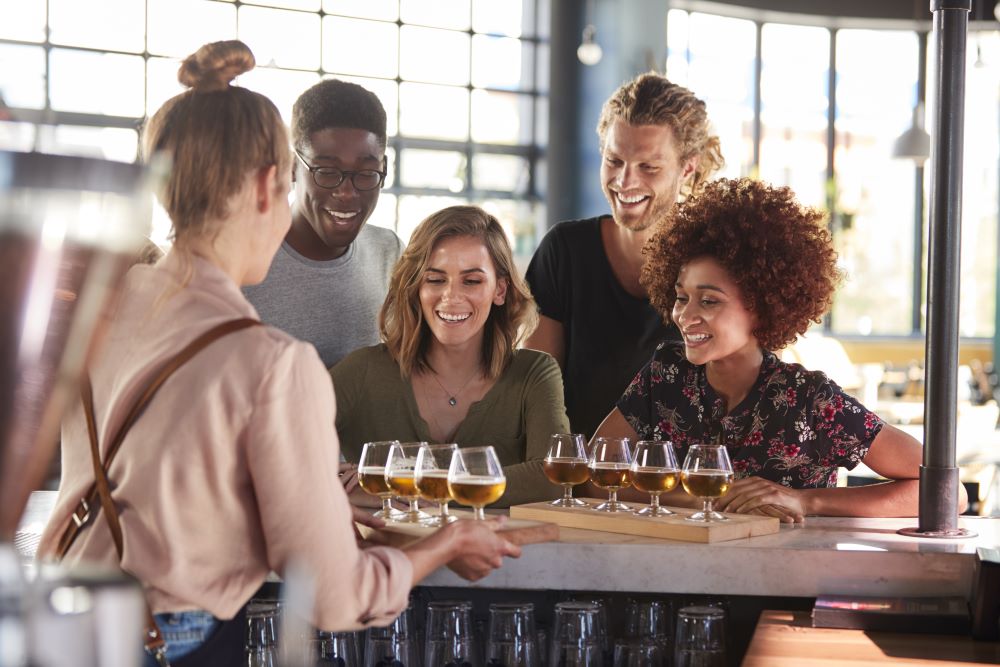 These towns are raising the brewery bar.

Breweries are big in the Boston area. With a history that dates back to the 17th century and close to 100 breweries near the city, it’s no wonder Boston often ranks on lists of America’s best beer towns. While you’re getting to know the Boston suburbs, add a few of these spots to your list.

In the suburbs west of Boston, you get the best of both worlds. These towns are commutable to the city (some even have a train station) but are far enough out to feel separate from the hustle and bustle. With all of the state parks, there are miles of trails for hiking, biking, and cross country skiing near these ‘burbs.

And when locals want to grab a beer, they have tons of great options. There’s Jack’s Abby, Springdale and Exhibit ‘A’ (check out the calendar for live music and yoga) in Framingham plus 7th Wave Brewing and its incredible wood-fired pizza in Medfield. Runners can join weekly run clubs at Lookout Farm or Lost Shoe.

For live music with your brew, visit Start Line Brewing, Ground Effect, Medusa or Tackle Box Brewing. Cold Harbor Brewing and Flying Dreams both feature pet-friendly patios so you don’t have to leave your four-legged family member at home.

The towns north of Boston are known for their beaches, historical sites, and well-regarded public and private schools. Locals often spend warm days relaxing at one of the many sandy coastal spots, like Crane Beach or Wingaersheek Beach. During the winter, residents head inland for the Nashoba Valley ski slopes.

The brewery scene is strong in the northern suburbs, especially in Beverly where you’ll find four local taprooms Channel Marker, Backbeat, Gentile, and Old Planters. In nearby Peabody, there’s the dog-friendly Granite Coast Taproom and in Essex, locals can enjoy beer and craft hard seltzers at Great Marsh.

Brewer’s Tap & Table features a menu of elevated pub fare alongside their brews and Armory’s Tomb has a seasonal beer garden (local tip: this one’s child- and dog-friendly).

Craving a cider instead? Visit Far From the Tree in Salem or the Carlson Orchards Cider Barn Taproom in Harvard for a flight of hard ciders. You can even bring the kids for an afternoon of pick-your-own apples during the fall season.

South of Boston you’ll find lots of community-focused towns. Young families love these suburbs for their sought-after schools and easy access to the outdoors. Between the beaches and nature reserves, there’s always something to do on sunny days.

Looking for somewhere else to spend a sunny day? Trillium Brewing Co. in Canton and Stellwagen in Marshfield both have huge outdoor spaces. For entertainment along with your beer, test your trivia knowledge at Wormtown Brewery or Castle Island or listen to live music at 67 Degrees Brewing. Weymouth runners can join the twice-weekly Barrel House Z run club.

And if you want to bring the whole family, dogs and kids are welcome at Vitamin Sea Brewing, Untold Brewing, Second Wind, and Widowmaker Brewing. Shovel Town Brewery in North Easton also features a full menu of pub fare (kids are welcome, but dogs have to stay home). Mayflower Brewing in Plymouth is another family-friendly beer garden complete with a rotating lineup of food trucks on the weekends.

Ready to start your search? Schedule a Suburbs Strategy session now. We can set you up with a list of towns to start exploring — and map out the breweries to visit while you’re at it.