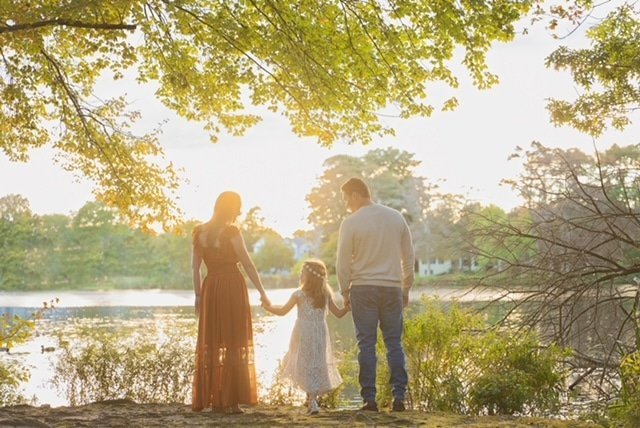 They knew it was time to hit the South Shore — and they were right.

Kelly Restagno knew it was time to start searching Long Island’s South Shore. After spending the last few years in Long Island City, she and her family of three were ready for more space — and were ready to ditch the NYC school lottery.

“We needed more common space and a yard,” Kelly explains. “That was really the factor for us. So was not having to navigate the public school lottery ever again.”

The public school in the family’s LIC neighborhood was fantastic, Kelly explains, but her daughter wasn’t guaranteed a spot for preschool or kindergarten — and that added to their stress.

“We got lucky on the lottery both times and my daughter got in,” she says. “But the idea of having to do that every couple of years — I didn’t want to deal with that.”

With an eye on the South Shore, Kelly and her husband Michael dove into towns.

“Long Island was the key location,” she says. “My husband works in Long Island. My in-laws are in Long Island. And then I needed to be able to commute into the city again at some point, and the South Shore commute is really easy.”

They also wanted a progressive area with a strong sense of community, a strong school system, and lots of activities and extracurriculars — plus a lot that had enough space for a pool, in the future.

In fall 2020, Kelly reached out to Suburban Jungle, with an eye on moving in early to mid-2021. Immediately, their Suburban Jungle Strategist Robin Hoberman started putting together a strategy, including towns to start touring ASAP.

“We were able to narrow down our search a lot by driving around and sharing our feedback with Robin,” Kelly says. “As we narrowed down even more, our Suburban Jungle realtor was also invaluable.”

Their process, Robin adds, was smart, strategic, and well-informed.

“Having Michael’s parents on Long Island — and the fact that he works out here — gave them a solid jumping-off point for their search,” she explains. “But they also wanted to do their due diligence — to really explore and get to know different communities and even different neighborhoods, to ensure they were zeroing in on the right spot. It’s a big decision — and they didn’t take it lightly.”

After spending almost every weekend of early 2021 driving around Long Island, the family ultimately decided Wantagh was the right fit. In March they put in an offer on a house and closed in May.

“We actually saw our house very early on — in January,” Kelly says. “It’s new construction and it was priced a little over what we wanted to spend and we just couldn’t get on board. So we kept looking and, in March, it happened to still be on the market — but they had an accepted offer.”

Those buyers, Kelly says, were dragging their feet in signing the papers — so Kelly and Michael came in with a counter offer.

“The builder was amazing,” she says. “We offered to turn everything around in 24 hours if he accepted our offer. He agreed. Two days later, we were under contract. It was definitely meant to be.”

Months into their move, the family of three has only positive reports from Wantagh.

“We got very lucky — we have so many kids that live right around us,” Kelly says. “And when it’s warm, we’re so close to Jones Beach and the community pools and parks. We’re so excited for summer!”

There are countless areas to explore — and we can help you find your perfect community. Get in touch now and let’s get started. All of our services are 100% free.