Commute by Ferry in These Waterfront Suburbs 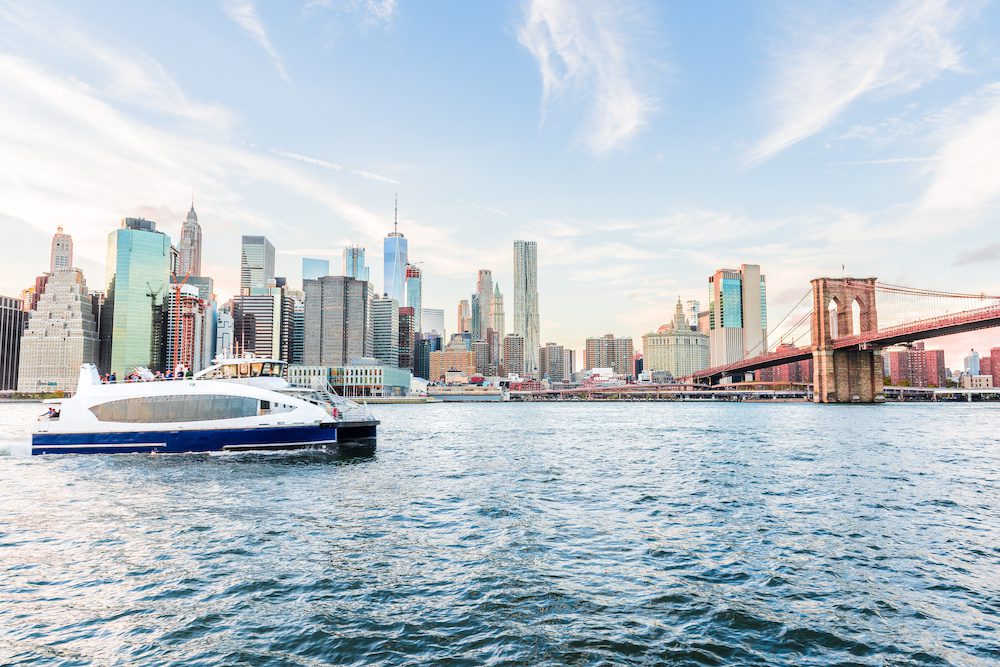 Looking for a less stressful commute? Consider taking a ferry to the city.

With offices reopening, many commuters are revisiting their go-to routes to work in favor of safer, more socially distanced options — enter the ferry. Not only are there plenty of NYC suburbs with local ferries, but many marinas have free or low-cost parking, so commuters in neighboring towns can hop on board. It’s a much more scenic way to get to and from the city — and with open-air seating options, you won’t have to worry about being face to face (literally) with your fellow commuters. Here are some suburban hotspots with easy ferry access.

Since there are no trains in Edgewater, many commuters opt for the ferry which picks up and drops off at the Edgewater Ferry Landing and West 39th Street. Keep in mind there is a transfer at Port Imperial terminal, but it’s quick and easy. Alternatively, you could take this new ferry route straight from Edgewater to downtown Manhattan, no transfer needed.

Locals can get to the Edgewater ferry terminal by walking, taking bus 158 or 188, or riding the shuttle — just keep in mind parking isn’t available onsite.

Locals actually have two options for ferry terminals. Most opt for the Port Imperial Terminal which drops off at West 39th Street, Manhattan Pier 11 near Wall Street, and Brookfield Place in Battery Park City.

This Weehawken terminal is convenient for locals and those who just want to ferry into the city — many commuters from Bergen and Essex County towns choose to take the short drive to have the benefits of the ferry commute. There’s a convenient onsite parking garage and the terminal is close to a Hudson-Bergen Light Rail stop, making it easy to drive to take the local train straight to the ferry.

Local residents of Fair Haven and Rumson and other nearby towns also enjoy the speed ferry access to NYC.

Commuters can use the Seastreak ferries for stress-free commutes and weekend trips to the city. This Seastreak route travels from Highlands to Atlantic Highlands to the Battery Maritime Building Slip 5 and ends at East 35th Street. Parking is available at both New Jersey-side terminals making this a convenient option for Red Bank and Long Branch residents, too.

Hoboken has two ferry terminals. The Hoboken 14th St. Terminal offers routes to West 39th Street and Brookfield Place and has nearby public parking. Hoboken’s main terminal, the Hoboken/NJ Transit Terminal offers a ferry route to Pier 11 and Brookfield Place. Although parking isn’t available, commuters can reach this ferry terminal via the PATH train, NJ Transit trains and buses, and the Light Rail.

Many commuters from across the NJ suburbs take trains into Hoboken and hop on the ferry for the most direct commute to their offices. The ferry provides another option, in addition to bus or path services.

#5. Glen Cove, NY
While the Glen Cove ferry isn’t quite up and running yet, it seems to be coming soon. Tested during the Long Island Railroad repairs in summer 2019, locals anticipate this ferry route will eventually launch for good, shuttling people between Glen Cove and both West 39th Street and Pier 11, Monday through Friday.

The terminal sits right on the Glen Cove Marina close to Garvies Point Brewery — a great spot to grab a drink after an evening commute. The terminal also includes ample parking, with nearby street parking surrounding the new residential buildings and parks.

This is just a piece of Glen Cove’s resurgence — and it’s definitely one to keep an eye on.

No matter what your family’s priorities are, we are here to help you find the suburb that checks all of your boxes. Contact us today to schedule your FREE Suburbs Strategy session.