After Years of Searching, Orinda Was the “Easy” Choice 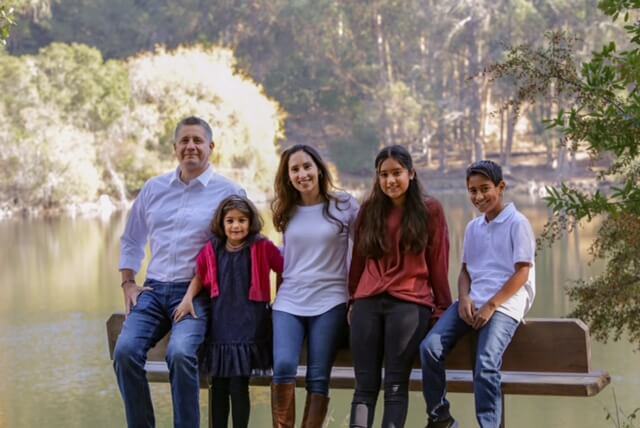 This Bay Area family of 5 was nervous about leaving the city—but now in the ‘burbs, they’ll never look back.

When Mojgan and her family started searching the San Francisco suburbs more than six years ago, though, they were reluctant to leave—Mojgan and her husband had five-minute commutes to their respective practices and they loved being in the city.

“But there were drawbacks, too. Taking the kids to school in the morning took 45 minutes—their school was on the other side of the city,” Mojgan says. “So we were kind of trading one convenience for another. Now, I just open the door and they go to school. It’s a whole different experience.”

While the family loves living in Orinda the town wasn’t even on their “must-see” list when they started searching. It wasn’t until they synched up with Suburban Jungle that they started zeroing in on their future suburb.

Though they weren’t ready to move after their initial strategy session, Mojgan says Strategist Pamela Goldman checked in every few months, just to see where they were. This was just the reminder Mojgan and her husband needed to gut-check where they were at that moment in time—and if now was the right time to make the leap.

“We were so reluctant to give up our commutes and the extra time at home,” she says. “And then we worried about things like, ‘would our kids lose their street smarts,’ and ‘would they be uncomfortable in the city?’”

Eventually, though, they agreed it was time to make a move.

“I also knew Orinda would be big enough so the kids, as well as Mojgan and her husband, would find friends and community very, very quickly,” Pamela says, “but not so big that they’d feel lost. This seemed especially important because they weren’t moving with young kids.”

“Once Pam recommended Orinda, we started to explore,” Mojgan says. “I talked to A LOT of moms—and everyone said they really found their tribe in Orinda. I heard that over and over, and it’s been so true for us. It took those first few months to build our network—to find those people who will pick up your kids at school and who really made us feel at home. But even that was easy.”

Making the Leap—Work, School and All

In 2017, the family of five made the leap from San Francisco to Orinda—and never looked back. At the time, Mojgan’s kids were 11, 9 and 5.

“It felt like the right time,” she says. “My oldest was going into sixth grade. My youngest was going into kindergarten.” Her middle—her son, Lucas—was going into fourth grade which, Mojgan admits, she was worried about. “It seemed like a tough year to make a move—but we did and it was fine. The transition to the suburbs—and to their new schools—was so much easier than I expected.”

Her kids now, Mojgan says, have tons of friends in schools, she notes, are diverse and welcoming. Also great? That the elementary, middle and high schools are all walkable.

“THAT is a game-changer,” Mojgan says. “It’s unbelievable.” The schools, she adds, have exceeded her expectations. While not as progressive as San Francisco schools, she has seen greater “thoughtfulness” in the district as more and more city families make their way to Orinda.

Pamela agrees. “I think city families underestimate walkability and bikeability to school,” she says. “Especially if they’re working parents, an area that kids can walk or bike to school on their own can be a lifesaver.”

During this time, Mojgan also opted to move her practice to Orinda. While her husband still commutes to the city, having her work in town has made the transition—and managing the family’s schedule—much easier. At the same time, Mojgan says, Orinda is close enough that they can easily pop in on weekends. She and her husband, she adds, even head in for date nights.

Despite the proximity, though, there’s so much to do in Orinda that they don’t get back to the city as much as they’d initially anticipated. City friends, Mojgan says, tend to come their way.

“They love visiting us in the suburbs!” she says. “And we love showing them our community. We’ve even recommended Suburban Jungle to a lot of our friends in San Francisco.”

Looking back, Mojgan can’t believe they hadn’t been looking in Orinda. “It was just this little, random community,” she says. “We didn’t even know about it! But I am so, so glad we found it and so, so glad we’re here. If you’re thinking about making a move to the suburbs, just do it. I can’t tell you the number of times my husband and I say, ‘we should have done this 10 years ago—what were waiting for?’”

No matter where you are in your urban-to-suburban journey, we can help. Get in touch and schedule your Suburbs Strategy session now.