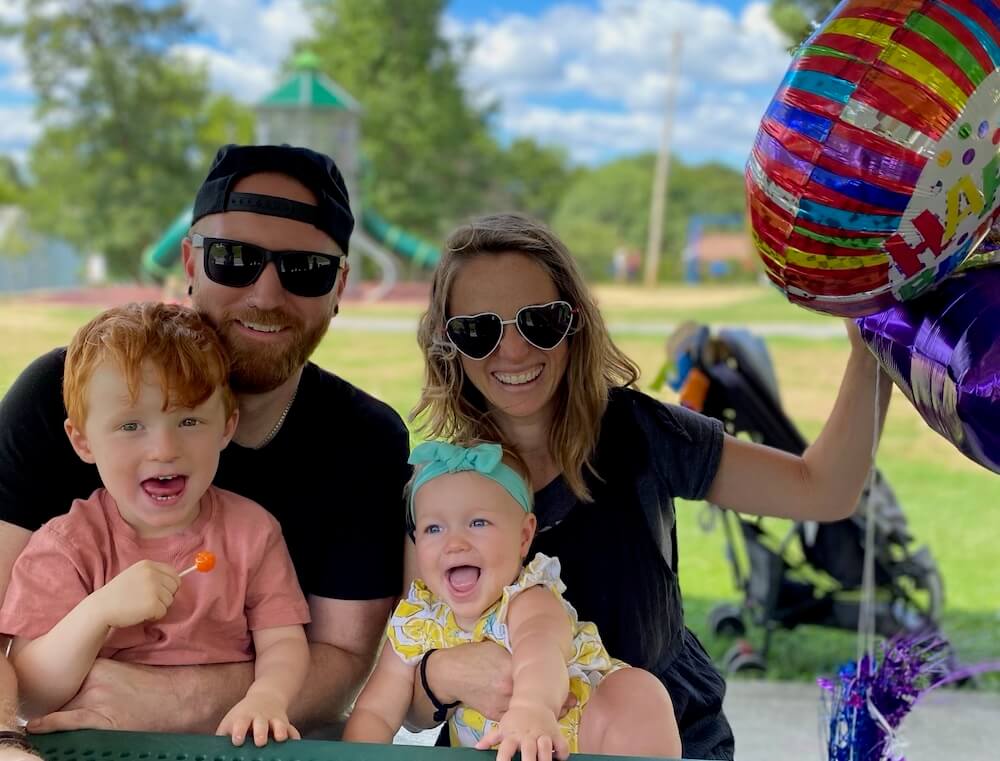 “It’s funny — we thought we were moving away from the city, but everyone we meet is from Brooklyn,” says Sara Dobbs. “So it’s a good balance — we still feel close to everything, but we’re definitely out of the city. It’s perfect for us.”

Before moving to Beacon, Sara and her partner Jared Lairmore had each spent significant time in the city. Sara had moved to Brooklyn after graduating college, while Jared had attended Pratt Institute and been in the borough ever since. Even though they loved living in Brooklyn, in early 2019 they say they knew it was time to start exploring suburbia.

“We were having our second baby, we were growing our design firm, and we knew it was the right time — we were running out of space and, beyond that, we really wanted to be somewhere with access to outdoor activities,” Jared says. “That wasn’t Brooklyn.”

After friends recommended Suburban Jungle, Sara and Jared dove in, connecting with their Strategist Allison Levine and working through their priorities and next steps.

“Sara and Jared knew they wanted to stay along the Hudson River and be on MetroNorth,” Allison says, “so we started there. They explored lots of different towns so they could get a feel for what was out there and, through that process, started to narrow down their list.”

Beyond space and outdoor access, Sara and Jared knew they needed to be close enough so they could easily head into the city, as their company —Factioned— and its core team would be staying in Brooklyn. But, since they weren’t planning to be daily commuters, they also wanted to expand their search perimeter into further-out communities.

“Factioned is a multidisciplinary design/build firm we founded five years ago,” Sara says. “Our main studio is in Industry City in Brooklyn but knew we wanted to expand once we moved. So choosing a new community wasn’t just about the family — it was about finding a second home for Factioned, too.”

Quickly, they landed on the Hudson Valley and knew it synched with their personal and professional needs.

“Initially we explored Rhinebeck and Red Hook, in Dutchess County,” Sara says. “Hudson Valley felt like the right fit, so we gave those towns a real look. We instantly felt a connection to this area— and it felt like a great spot to open a satellite office.”

After exploring multiple towns in the Hudson Valley, the couple landed on Beacon. A popular weekend destination for New Yorkers, more and more families are making a permanent move to this arts and culture hub.

“One of the things Allison and Suburban Jungle helped us with was really digging into our priorities,” Jared says. “We worked with Allison to make our checklist — for us, it was walkability and having that outdoor space. We also knew we wanted culture, great food, and access to different activities and things to do. When we started, though, we didn’t imagine finding that up here — but we did and we couldn’t be happier. Beacon has the perfect mix of everything we wanted.”

Reflecting on 18 months in the suburbs

In September 2019, Sara and Jared made the move to Beacon. Now, more than a year in, they’re happily settled in their new community.

“Our oldest is in preK in the local school district and our youngest — she’s now 16 months old — is home,” Sara says. “Our four-year-old is completely adjusted — he loves it. He loves his teacher, he has tons of friends, he has a backyard to play in. It’s been amazing to watch him grow up here.”

In addition, the studio recently purchased a 1940s Cape Cod fixer-upper. With the Factioned team, Sara and Jared are planning a gut renovation of the house as one of their first projects in the Hudson Valley (check out photos here).

Looking back, both Sara and Jared say exploring first-hand was key to finding Beacon so quickly — and they recommend other city families block out weekends and do the same.

“We didn’t have a car,” Jared says. “Every weekend, though, from January to April 2019, we rented one and came up to Hudson Valley and drove around. We tried out so many different towns on our list — everything Allison recommended. Once Beacon was on our radar we visited five or six times so, when we finally moved, we had a good sense of what we were getting into — and Beacon has more than exceeded our expectations.”

Ready to start exploring suburbia? Get in touch with Suburban Jungle now and schedule your free strategy session.