These 6 Companies are Moving to Austin 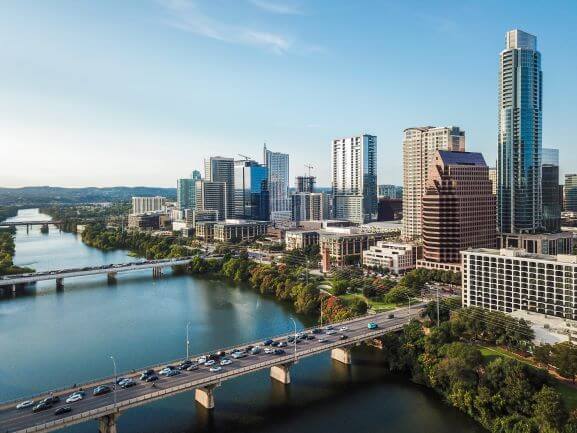 With more and more global businesses relocating, families from all over the country are flocking to the Austin suburbs

Dubbed “Silicon Hills,” Austin has recently been attracting even more tech and innovation companies and high-velocity startups than ever. But those tech giants aren’t alone—big names in lifestyle and consulting are also heading to Austin, while existing businesses are making plans to expand and evolve their presence. In 2019 alone, the Austin Chamber of Commerce noted 58 relocations to the area—and, with it, close to 5,000 new jobs.

While many Austin locals are scooping up roles at these sought-after enterprises, many families are relocating from around the country and around the globe for positions—and that means the Austin suburbs will no doubt be booming with influxes of young families in 2020 and beyond.

So who (besides, maybe, YOU) will be calling Austin “home?”

After debating Texas or Nevada for its new site, Tesla opted to build a 2,100-acre location in Travis County, just minutes from downtown Austin. Work is already underway with a projected 2021 opening—and, by late 2021, the site will be the largest producer of Tesla’s new Cybertruck electric pickup.

In April, Silicon Valley-based Airtable—software innovators—opened a customer engagement center in Austin. While hiring was a bit slowed by COVID-19, the company plans to bring on 100+ people over the next few months. Brian Hagen—formerly of Twitter and Nextdoor—is running the Austin office, guaranteeing this location will be a hotbed of innovation and, likely, expansion in the coming months and years.

While Google has a footprint in Austin, their new plans will make this one of its largest locations worldwide. With offices slated to open in 2023—and nearly 900,000-square feet bought or leased in the area—Google could accommodate more than 11,000 people across the three new locations.

With three new Austin locations in 2020—Kyle, Round Rock and Pflugerville—and 1,850 jobs across the sites, these distribution centers are, many believe, a signal of what’s to come from the ecommerce behemoth.

This Boston-based global consulting firm has more than 14,000 employees—including, now, a new team in Austin. Their office is located in downtown Austin and, already, has staffed 60+ people.This, though, is just a taste. In addition to the dozens of companies heading to Austin, many big names—eBay, Apple, Facebook and Dell, to name a few—are expanding their footprint in and around Austin in 2020 and 2021. With that, there’s no doubt many families from Silicon Valley, New York and other commercial hotspots will be making a move.