Trading a London Move for Life in the Bay Area 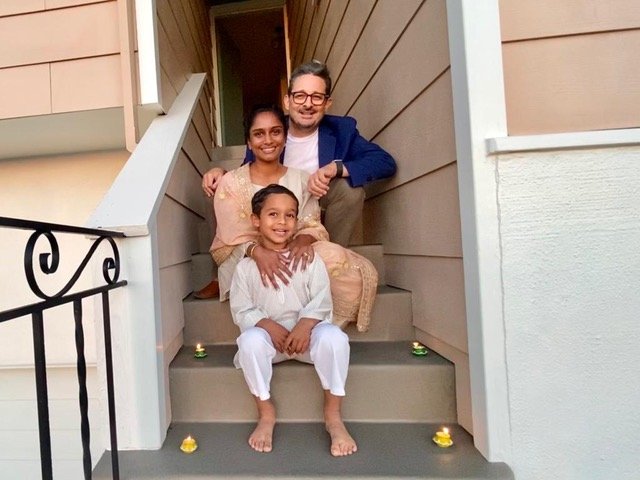 These foreign correspondents had lived in Australia, India, and more — and now they wanted a smooth state-side transition for their five-year-old.

In spring 2021, Nidhi Dutt and her husband Eric — long-time foreign correspondents and journalists — were living in India with their five-year-old son. Having moved from Australia recently, the family was already planning their next move, this time to London. But then life took an unexpected turn

“Eric became critically ill,” explains Nidhi. “He needed to be medivaced back to the U.S. — to Seattle.”

Over the next few weeks, Eric recovered and the family reassessed their next steps, opting not to return to India. Instead, they accepted an offer in the Bay Area.

“Given everything our son had been through, we wanted a very smooth transition into whatever came next,” Nidhi says. “A friend suggested reaching out to Suburban Jungle since we knew nothing about San Francisco — and needed to move very quickly to ensure he was able to start kindergarten in the fall.”

“We hit the ground running,” Pamela says. “It’s an incredibly competitive market and we needed to do much of the search virtually — but they were extremely focused and knew what they were looking for. And I wanted to make sure they found it.”

During their initial conversations, Nidhi and Pamela talked through the Bay Area and dug into the family’s key priorities: finding a family-friendly, kid-oriented community with A+ public schools, great restaurants, and walkability.

“The East Bay — specifically the Berkeley and Kensington area — seemed to align with their wants, needs, and goals,” Pamela says. “We talked through those communities in detail and, soon after, Eric made the trip from Seattle to San Francisco to tour a few towns and look at houses.”

These insider insights, Nidhi says, were essential to keeping their search moving.

“Pamela’s initial rundown of ‘wheres’ and ‘whats’ was so helpful,” Nidhi says. “As you can imagine, if you’re really new to an area or a community you don’t know much of anything. Pamela was great. She’s a mom. She understood that we needed to land in the right place for our family and for our son. She gave me the lowdown on different areas then Eric planned his trip down.”

During his week-long visit, Eric visited dozens of neighborhoods and homes, including four in the Berkeley area. The family immediately fell in love with South Kensington and made an offer on a house.

“We got it!” Nidhi says. “We got the first house we bid on. From the time we talked to Pamela until we moved was about a month.”

Preparing for life in Kensington

With the house under contract, Nidhi and Eric enrolled their son in kindergarten at Kensington Hilltop Elementary School.

“Even though we hadn’t closed, the school was very gracious and very kind,” says Nidhi. “They welcomed him and us — and he was able to start school on the first day of the year.”

Now, months into the school year and their new lives in Kensington, Nidhi and her family are happy where they landed and are thrilled with the smooth transition into the community.

“We were clear from the beginning we needed a resolution for our son — and a positive outcome,” Nidhi says. “Pamela reacted immediately and introduced us to an amazing Suburban Jungle agent. There were never judgments about price or what we wanted or didn’t want. Just recommendations and insights. It was very, very comforting.”

Looking back, Nidhi recognizes the role timing played in their move. But to other families — especially those moving great distances — she encourages spending time processing the information Strategists have to share and taking time to explore communities before making the leap.

“I would tell other families to connect with Pamela — or another Suburban Jungle Strategist — earlier. Give yourself more lead time,” she says. “It would have been great to have more time to process all of the wonderful information we received, then come to San Francisco and visit — see things for ourselves, first-hand. Seeing a community for yourself will either dispel a lot of the information you have or it will amplify what you’re feeling. When Eric came to Berkeley and Kensington he saw the community, the walkability, and how kid-friendly it is — but he needed to see it to believe it.”

Looking for the perfect San Francisco suburb to call “home?” We can help. Schedule your free Suburbs Strategy session now.